You are here: Home / Boomer Memories / The World Series 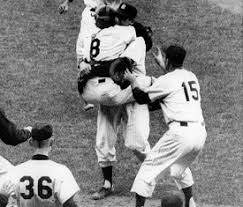 On October 8, 1956, I was in 7th grade. At the 2 PM bell, they let students out of their classrooms and those who were interested assembled on chairs in the auditorium. A television set was on. The picture was a little fuzzy, but it was Game 5 of the World Series at Yankee Stadium.  The Dodgers and Yankees. Vin Scully and Mel Allen were the announcers. Babe Pinelli was the ump behind home plate and 64,519 fans were standing as one.

I, an avid Dodger fan, sat beside Dave Gladwell, a dyed in the wool Yankee fan, and together we watched history as Don Larsen pitched a perfect game and my beloved Bums went down to defeat by 2 to 0.

The World Series is now played at night, late at night, and the only ones watching are guys at the sports bars and the 50,000 or 60,000 fans freezing their fannies off at the stadiums as the teams play deep into October.  Kids no longer watch the games. It comes on and stays on too late, often past midnight and many average Americans also skip what was once the premiere event in all of sports.

Baseball is no longer America’s sport. It’s simply another one of many venues for television and an opportunity to sell more Budweiser. I once knew the name of every starting player on every team in baseball. Today, I would hard pressed to name as many as 20 players in the American League. Mickey Mantle played his entire career for the New York Yankees. Today, players come and go as the $30 million contracts beckon. To take a family of four to a big-league game with parking, food and drinks can cost as much as a thousand dollars.

Money and greed have taken over what was, and still is, a beautiful sport – a chess match between pitchers and batters, managers and pinch hitters. Ted Williams once said it took more athletic ability to hit a baseball travelling and spinning at nearly 100 miles per hour than anything in any other sport or activity. He was right.

The Washington Nationals are now up two games to none versus the Houston Astros in the 2019 World Series. I’m rooting for the Nats, but I haven’t watched a game. It comes on too late for me. Ask a 12-year old who won and they probably don’t even know who’s playing.

One good thing about golf on TV. They can’t play at night.

I am Jim Brewer, Editor of the new CvilleBuzz, a humble on-line attempt to entertain those, not only … END_OF_DOCUMENT_TOKEN_TO_BE_REPLACED