You are here: Home / Boomer Memories / The Ice Cream Man 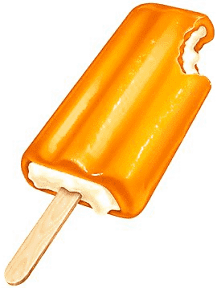 (This is a repeat, but it’s timely and sure brings back good memories)

It took about three weeks for the euphoria of getting out of school for the summer to fade away. By that time, Boomer kids had seen all they wanted of their friends, and had done about everything there was to do.  The youngsters had played enough Monopoly games to qualify as miniature real estate tycoons. The Hide and Seek adventures every night were fun, but the “hiders” soon ran out of places to hide.

“Oh, the trash can again. You were in there two nights ago.”

By now, the Boomer baseball league had lost all its decent balls in the pasture field. Face it: There was only one bright spot in an otherwise monotonous existence.

There were few deep freezers in homes back then. If you couldn’t squeeze it in the small freezer compartment of your refrigerator, it didn’t get frozen. Ice cream was therefore a precious commodity. But every day, around 3 o’clock, you could hear him coming. The Ice Cream Man was on the way.

The small truck was painted in pink and blue pastels and played Disney songs like Zippety-Do-Dah, or sometimes Pop Goes the Weasel. It made no difference, because when the Ice Cream Man was coming, all other things were put on hold. Kids would stop skipping rope in mid-air and head for their respective houses, begging for nickels or dimes. Once properly funded, the youngsters raced like Olympians out to the street to flag down the Ice Cream Man, throwing their young bodies in front of the truck if necessary. I don’t recall anyone ever getting run over by an Ice Cream Truck, but it would have been a worthwhile sacrifice had it occurred. The injured kid would be a neighborhood hero for life.

“Did you see Billy get thumped by the Ice Cream Man? That was cool. Hey, Billy, when you get out of the cast, you can be the pitcher!”

The early ice cream trucks were not sophisticated vehicles. That had engines about the size of a Briggs & Stratton lawnmower and used dry ice for refrigeration. The enticing melodies were often generated with a hand crank from within the truck.

As the hot, sticky young Boomers hovered around the truck, the most difficult part was deciding what to order, and the Ice Cream Man was not taken with waffling decision-makers.

“What’ll it be, kid? I have other neighborhoods, you know!”

What would it be?

One of the Boomer favorites was a Push Up. A Push Up consisted of ice cream sherbet packed into a paper cylinder and pushed up with a stick. Push Ups came in cherry, lime, orange and blue – whatever that was. There were also Fudgsicles, and they seemed better back then – harder, more chocolaty and colder – if that’s possible. There were also Dreamsicles and Creamsicles. Both were beyond yummy on a hot, summer day.

Often, if a kid couldn’t round up a nickel, he would share a Popsicle with another deprived child. There were two identical halves to a Popsicle and the frozen bars were designed to split perfectly in two. But they never did. Usually the top end of one bar would break off, which made sharing quite difficult. Popsicles came in most every flavor, but banana was best.

And if you had a dime – big money back then – you could get an ice cream sandwich or an ice cream cone with nuts and chocolate on top. Usually it took a grandparent in the house to rate a dime for ice cream. With Moms, it was: “Here’s a nickel, split a Popsicle with your sister.”

When the Ice Cream truck chugged off, the kids perched on the curbside in silence and devoured what was before them, taking extra pains to suck any lingering juice or ice cream from the wooden sticks – and the wrappers. With two hours before dinner, there would be time for one more Monopoly game.

I am Jim Brewer, Editor of the new CvilleBuzz, a humble on-line attempt to entertain those, not only … END_OF_DOCUMENT_TOKEN_TO_BE_REPLACED