You are here: Home / Boomer Memories / The First TVs 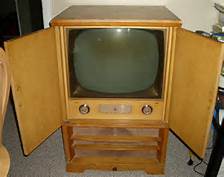 As America by the millions tuned in to last Sunday’s Super Bowl on their flat screen, hi-def., high-res, plasma infused TV sets, it gave this Boomer pause to think back to how it once was with television sets.

In the early years after the war, most families didn’t own a TV. It was the early to mid-fifties when sets became affordable enough that middle-income families could buy one.

But what beasts those things were!

Each came in a console only slightly smaller than a baby grand piano. They had doors to cover the screen when not in use. It took two brawny delivery guys to get it in the living room.

The choices in stations were limited to one or two in most small towns, and that was assuming the aerial wasn’t misbehaving. In the 50’s, houses had more TV antennas on their roofs than chimneys.

Boomers also remember turning on their sets and nothing happened. That’s because the sets had to warm up first. When the TV was good and damned ready, a picture finally appeared, fuzzy at first, then better, except there were usually minor adjustments required for the vertical and horizontal controls. Sometimes, if we could just get the vertical to slow down a little, we watched the rolling pictures anyway.

TV sets in the early years had tubes – picture tubes, tubes for controls, and tubes that burned out. The single most important man in town was the TV repairman, because it was he alone who determined whether or not you would be able to watch Steve Allen on Sunday night.

Programming throughout the day was iffy. Sometimes there was a program on and sometimes not. Sometimes ads, sometimes not. Often, there would just be a graphic on the screen and music playing for up to a half hour. And the programs began at 6 am and ended – with few exceptions – at midnight, with the National Anthem.

Everyone remembers the advent of color TV, when crowds gathered around to see the NBC Peacock in all its colorful splendor, but one of the biggest breakthroughs in TVs was with portable sets – TVs you could actually lift by yourself. Without a half cord of walnut or cherry wood for the console, most anyone could afford a portable set. In the late 50s, smaller, portable sets actually dropped below $100 for the first time. A major breakthrough as people could now afford multiple sets.

Boomers remember the Golden Age of television as being in the late 50’s and 60s, when ordinary families were portrayed with splendid writing and humor in shows like I Love Lucy, Father Knows Best, Ozzie and Harriet, and the Dick Van Dyke Show.

Recently, Nancy and I were channel surfing and found a station playing an old re-run of Fantasy Island. We watched intently, coming to the conclusion that there is not a single show on the air today as good as that one with Mr. Roark, Tattoo and “De Planes” flying in the many celebrity guests.

Technology has certainly improved, but not necessarily personal tastes.

I am Jim Brewer, Editor of the new CvilleBuzz, a humble on-line attempt to entertain those, not only … END_OF_DOCUMENT_TOKEN_TO_BE_REPLACED