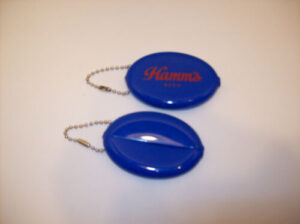 During the World War II, rubber and plastics were simply not available to consumers. But after the war, things changed. Needing to keep assembly lines open, manufacturers developed tens of thousands of new rubber, plastic, and fiberglass products. Among them was the rubber squeeze change purse.

The first coin purses were sold at five & dimes or drug stores (there were no K-Marts or WalMarts in those days). Sometimes kids received one as birthday or Christmas gift.

Boy, thanks a lot Mom and Dad!

Then, banks, insurance companies, hardware stores, gas stations and other merchants figured, “What a great way to advertise. These things are inexpensive, and we can give them away. When customers reach for their money, they’ll see our name.”

The small, oval purses had a slit in the front and the name of the benevolent company on the back. When you squeezed the purse from the ends, it conveniently popped open. Then, you reached inside, gathered the coins needed for the purchase and paid.

I hated the little rubber intrusions into my pockets. Half the time, the things would open inside your pocket and coins spilled out. So why not just put the darned pennies directly in your trouser pockets where’d they end up anyway?

Today, many of the old coin purses are quite collectable. The older they are and the fewer that were made, the more valuable they become on E-Bay and other trading sites.

Yet, I expect there are still a few Boomers around who actually use squeeze coin purses. If nothing else, they are reminders of a time gone by when life was simpler, when you could go to the movies for a dime and swig an ice-cold Nehi Grape Soda on a hot summer day.

I am Jim Brewer, Editor of the new CvilleBuzz, a humble on-line attempt to entertain those, not only … END_OF_DOCUMENT_TOKEN_TO_BE_REPLACED