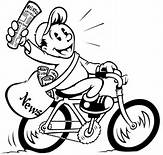 For many young Boomer males, becoming a “paper boy” was the first real job. There may have been a few “paper girls” out there, but not many.

Today, automobiles – particularly those with 4-wheel drive – are the principal means of newspaper distribution. But in the years following the war and all the way through the 60’s and 70’s, paper boys on bicycles, or on foot, made the rounds in various neighborhoods so the public could “read all about it.”

When I was eleven, I decided that I would become a paperboy. My friend, Brad, was giving up the local route and told me that I could make up to ten dollars a month. Ten dollars to a young boy in the 50’s was Warren Buffet-type money. All you have to do, Brad said, is drop the morning paper off to the 40 or so subscribers, then collect the subscription fees each week.

I accompanied Brad on two beautiful September mornings. The skies were blue. The air was fresh with the approach of autumn and the morning hour was a wonderful time to be out and about.

“I’ll do it,” I told Brad and he handed over his tools of the trade, which included a cloth bag for the papers, a hole puncher, and a cardboard account on a ring for each customer. When customers paid, you punched their ticket for a given week.

Delivering papers went well, until Sunday. Brad had failed to mention that if a bag filled with papers weighs ten pounds on a Saturday, it would weigh what felt to be 50 pounds on Sunday. The weight was such that it compressed the tires on my Schwinn bike to almost flat.

I finally figured out that if I put half my papers in the bag, then picked up the remainder midway through the route, it was an easier chore.

Brad also didn’t tell me about a certain Irish setter on Court Street that had a thing for the feet and ankles of paperboys. Brad must have convinced the owners of the attacking canine to keep the dog inside until he had formally ceded his delivery rites to yours truly.

Somewhere around week two, the setter began the attacks. It was guerilla warfare as the dog lay in waiting, only to charge with vengeance as my bike approached the house.

Each time I collected from those subscribers, I asked if they were sure they really needed a morning paper, and each time they said yes.

Ultimately I learned to pedal with just my right foot, keeping my left leg high enough off the ground that the dog’s sharp teeth would not find tender flesh.

Rain was another detail not mentioned during the paper route negotiations. For the first month, it was clear blue skies and ideal weather. In October, Mother Nature decided there should be rain. Lots of rain. Rain every day.

Readers, I would quickly discover, do not like to have their papers delivered in the form of a wet sponge. Rather, they overwhelmingly prefer dry papers, which meant I had to shield them with my body from the encroaching elements. I frequently finished my route soaked from head to toe, often having to wear the same wet tennis shoes to school each morning. Wet tennis shoes, by the way, get a little rank during the monsoon season. Mom had to get me another pair – one for the paper route and one for school, or when in the presence of other human beings.

In December, it snowed. As all paperboys will attest, bike tires and snow much deeper than 3- or 4-inches are not compatible. In the snow, I had to hoof it, unless I could convince my Dad to get out of his warm bed at 6 in the morning and drive me door to door. He turned out to be a champ, listening to my creative pleas and generally obliging.

“I think my fever is down to 104” was one way to get Dad to drive on a snow day. So was this bargaining chip: “I will feed your bird dogs for a month if you’ll take me just this once.” When I went to college, I think I still owed him 36 months of dog feeding.

After two years of paper-boying, I finally decided I had had enough of heavy Sunday papers, Irish setters, and the rains and snows of the season.

Thus, I approached a new kid on the block with this proposition.
“How would you like to make ten dollars a month? All you have to do is…”

Cartoons at the Movies

I am Jim Brewer, Editor of the new CvilleBuzz, a humble on-line attempt to entertain those, not only … END_OF_DOCUMENT_TOKEN_TO_BE_REPLACED