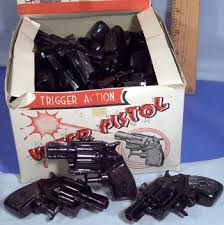 Continuing the series on growing up in Lewisburg, WV in the 1950s, a great town and a wonderful time to be young.

There were genuine marksmen in Lewisburg Junior High in 1956. Sharpshooters, you night say. As I would quickly discover, if you didn’t pack heat in self-defense, you would get squirted.

Squirt guns, you see, were the weapons of choice among the young people in the mid-50s. Before class, during class and after class, you could hear triggers squeezing off shots, pelting other students with a spray of water. So all the kids were armed and dangerous. Even the girls. Especially the girls.

But the girls didn’t play fair. After being squirted a time or two by the boys, the Lewisburg 7th grade girls quickly wised up. Instead of squirt guns, they filled plastic baby oil bottles with water, and when attacked, they responded in kind, dousing their assailants with as much as an 8-ounce load of H2O.

Not having pocket books in which to stow our weapons (there were no man purses in those days) the boys had to have concealable weapons for their back pockets. Those pink, orange and blue see-through squirt guns were far too bulky, and they didn’t squirt with authority. We much preferred the compact, black water guns. They resembled small revolvers, but we didn’t buy them because they looked real, we bought them because they could squirt water clear across a classroom. No water gun sniper was safe. A wet attack would bring heavy response.

A downside of the small water pistols was their lack of capacity. They held maybe 4 ounces of wet ammo, which meant there was a line at the water fountain between each class and we had to post lookouts to make sure no teachers were snooping around.

Ralph Barr, who owned Barr’s Five and Dime, was our enabler. He got weekly shipments of the small, black water guns and they were quickly snapped up at around 59c a pop. Fifty-nine cents to a junior high kid in the 50s was no small sum. An average weekly allowance was about a dollar and we need folding money to keep our .45 record inventories up to snuff, so we reluctantly spent our available cash on water guns.

A squirt gun could and should have lasted an entire school year were it not for savvy schoolteachers, like Coach Ryder, Mr. Holcomb, Mr. Scott and others. Those guys could hear a squirt gun trigger a mile away and would immediately track down the weapon, confiscate it and often dish out a little corporal punishment. Paddles. They were both legal and effective in those days.

Yes, we squirted each other – in class – with water pistols in 1956. But we didn’t talk back to our teachers. We said yes-sir and yes-ma’am. We obeyed and respected our parents and we didn’t have a clue about marijuana or drugs.

And if I had a water gun today and saw Bill Shaver, I’d give him a good squirt, just for old time’s sake.

I am Jim Brewer, Editor of the new CvilleBuzz, a humble on-line attempt to entertain those, not only … END_OF_DOCUMENT_TOKEN_TO_BE_REPLACED