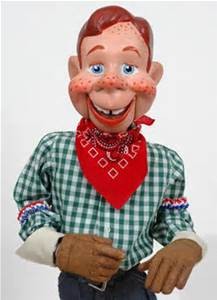 Hey kids! What time is it?

Breathes there a Boomer who doesn’t know the answer to that question? If it was Buffalo Bob Smith asking and it was a weekday afternoon on NBC in the 1950’s, it was most definitely “Howdy Doody time.”

Boomers remember the Howdy Doody Show as much for the quality of life during those years as for the quality of this popular children’s program. It was a time of peace with the promise of great prosperity on the horizon. It was an age of innocence and a time of optimism, when anything was possible. The American Dream was alive and well, and if you wanted to believe that a puppet with 11 strings was a real boy, it was okay.

Many Boomers recall coming home from school in their youth and playing outside until the magical hour arrived and the Howdy Doody Show was on TV, complete with the Peanut Gallery – an on-set bleachers section packed with 5- and 6-year olds who delighted at the honking horn and seltzer-squirting antics of Clarabell Clown. The Howdy Doody Show ran from 1947 through 1960, a veritable eternity in TV. In all, there were 2,543 episodes.

“Buffalo” Bob Smith was the creator and host of the show and used a combination of slapstick and fantasy to dominate children’s programming for nearly 15 years. Howdy Doody, however, was clearly the star.

Howdy’s name came from the informal greeting used by many westerners – “Howdy Do”. The show therefore featured a western influence. Buffalo Bob wore what appeared to be a leather fringe shirt and Howdy always donned a red bandana with a plaid shirt, blue jeans and cowboy boots.

The show took place in Doodyville, a fictitious circus town, which had both puppet and human inhabitants. The Howdy Doody Show had an abundance of great characters, not the least of which was Clarabell, the clown that drove Buffalo Bob crazy with surprise blasts from his seltzer bottle. Clarabell was mute and communicated through toots on his clown horn, which Buffalo Bob, Howdy and the rest of the gang in Doodyville could mysteriously interpret. Clarabell was originally played by Bob Keeshan, who would later become Captain Kangaroo. Other significant characters on the Doody program included Princess Summerfall Wintersprings, Heidi Doody (Howdy’s sister). Phineas T. Bluster. Dilly Dally, Flub-a-dub and Chief Thunderthud, who first coined the phrase “Kowabunga.”

Anytime Howdy Doody wanted to emphasize a point, he was famous for saying, “Kowabunga, Buffalo Bob.”

During the production of the show, it was always assumed that Howdy Doody was real. No one ever said get the puppet, they always said, “Get Howdy” Pulling the strings for Howdy and other Doodyville marionettes were Rufus Rose, Rhoda Mann and Dayton Allen.

What child of that era cannot clearly remember Buffalo Bob with a spoon in hand, dipping into a bowl full of creamy Jell-O pudding topped with whipped cream? Kids by the millions begged for Jell-O each week their families went grocery shopping. In those days, Jell-O gelatin and pudding were staples in every pantry.

Boomers might recall that each show began with the children from the Peanut Gallery accompanying Buffalo Bob as they sang the show’s theme song “It’s Howdy Doody Time”, to the melody from Ta-ra-ra Boom-de-ay. The lyrics went something like this:

Bob Smith and Howdy Doo, Say Howdy Doo to you.

Lets give a rousing cheer, ‘Cause Howdy Doody’s here.

It’s time to start the show, So kids, let’s go!

On September 24, 1960, the Howdy Doody Show ran for the last time. It was announced before the show that Clarabell would have a big surprise, and he did. After years of silence, Clarabell, with a tear in his eye, finally spoke.

For Boomers, it was also a goodbye to another time and another era. Vietnam was on the way.

I am Jim Brewer, Editor of the new CvilleBuzz, a humble on-line attempt to entertain those, not only … END_OF_DOCUMENT_TOKEN_TO_BE_REPLACED