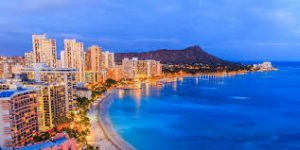 Aloha is a Polynesian word meaning, “Are we there yet?”

We are now in Hawaii, celebrating our 50th anniversary. If you’ve never been here before, let me say this: “Hawaii a long way from Charlottesville. It’s like taking a space shuttle to Mars, well maybe not all the way to Mars, but at least to the outskirts of the Red Planet. It is so far that – due to the time zones – you arrive the day before you left, which will affect your normal living activities for pretty much the rest of your life.

We departed Baltimore on Friday at about 5 am, a morning when the winds decided to blow 30 to 40 and take down power lines throughout much of the northeast. I feared we wouldn’t be able to take off and we would miss our Hawaiian cruise, but our captain, Han Solo, said, “Let’s go!”
He lifted the big bird up and away and three hours later we settled on the tarmac at Houston. Houston, in my opinion, is the nicest, most modern airport I’ve ever frequented. It is clean, bright, well equipped for business travelers and it is only a short walk to make connections with your next flight. We were in Houston only briefly, before Han and Jabberwocky were once again airborne, this time on a rather long flight to Honolulu – long as in 8 ½ hours.

We slept, we ate, we drank adult beverages, we played crossword puzzles, we watched two movies and we had only been flying for an hour and a half. It was a long trip, but we finally touched down in Honolulu at about 2:30, whatever time they are on. It was light, so I assume it was the afternoon.

Honolulu is quite a city. It reminds me a little of Hong Kong, except that I have never been to Hong Kong, but I have seen post cards. Honolulu is wall-to-wall buildings and people. There are a few scattered palm trees in the city, but not much else in the way of tropical vegetation. Then we shuttled to Waikiki Beach, where we would spend the night at the Waikiki Marriot in advance of boarding Norwegian’s Pride of America the following day.

Waikiki is a special place. Our hotel room had a private balcony overlooking the Pacific Ocean. It was glorious. That evening, I assume it was evening; we walked along the beachfront on some of the priciest real estate in the world. The steaks are so expensive here that you pay for your check in installments.

From my brief observations, there are two types of people in Hawaii – tourists and regular Hawaiians. You can tell them apart either by DNA sampling or by observing their behavior. The tourists are the ones with cell phones, snapping selfies and taking pictures of everything from telephone poles to bits of gravel along the pavement and even of the Pacific Ocean. The Hawaiians are the ones counting their money from net receipts of tourists’ purchases.

On Saturday at noon, we will board the ship and begin our cruise.

Aloha!
We are here!

Hand Me Downs and Tattoos

I am Jim Brewer, Editor of the new CvilleBuzz, a humble on-line attempt to entertain those, not only … END_OF_DOCUMENT_TOKEN_TO_BE_REPLACED