You are here: Home / Boomer Memories / Go Fly A Kite 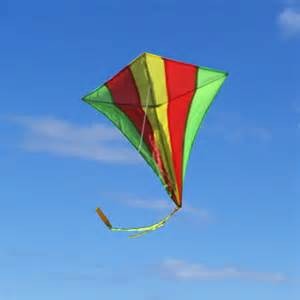 Boomer kids divided everything into months. January was noted for New Year’s Day and celebrations before heading back to school. February was cold, which meant snow, which meant school closings, which meant tearing down hills sides in a genuine Flexible Flyer sled and hoping for the best.

March meant wind and wind meant kites. Kites were a big deal back then. Every kid had one. Some could really make them soar. I was one who could not. I tried box kites, and triangle kites. I made custom tails from old, torn pajama bottoms. I used genuine kite string and ran like a deer in order to launch my aircraft, which turned out to be more of a John Deere plow than an actual kite.

The young Boomer years passed and March was always one of my least favorite months. April had Easter egg hunts. May meant school picnics and Little League tryouts. All the months were fun but March.

Then I had kids. My youngest daughter, Laura, approached me one day, around March 1, and announced the Annual Third Grade Father/Daughter Kite Flying Day at the school yard.

“Daddy, will you help me build and fly a kite?”

What could I say?

“Laura, your father is a moron and can’t get a kite off the shelf of WalMart, much less make it fly. Also, when it comes to putting things together, that part of my brain was severely damaged in the birth canal. I can barely open a box of Cheerios, much less put a kite together.”

It had been years since I was in the kite department in the hardware store, but I hoped that by now modern technology would have generated a pre-assembled, fool-proof kite for morons. It had not. In fact, the kites were more complicated than ever and had three pages of instructions for assembly. None made sense, not even in Spanish, so Laura and I did our best, which included snapping one of the thin wooden cross braces on first try, followed by a trip back to the store for a replacement. Eventually, we assembled something which resembled a kite on the cover of the package and awaited the dreaded day. I prayed for rain, but it was clear and windy. Immediately, other fathers and their children sent kites soaring into the stratosphere, some so high that incoming planes had to change course. I think 12 feet was our highest altitude. I ran as fast as I could, the kite would make a feint as if going up, then plunge into the dirt, requiring re-assemblage and a Herculean effort at language control.

“Thank you for trying Daddy. We’ll do better next year.”

Now I know exactly what it means when someone says to “Go fly a kite.”

Now Those Were Fireworks!

America’s One and Only King

I am Jim Brewer, Editor of the new CvilleBuzz, a humble on-line attempt to entertain those, not only … END_OF_DOCUMENT_TOKEN_TO_BE_REPLACED