You are here: Home / Boomer Memories / Gasoline: Take a Number 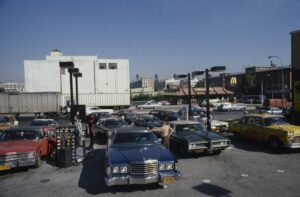 Know what’s worse than having to pay $5 or $6 for a gallon of gas? Not being able to buy gas at any price. There are many of us who remember when we couldn’t. It was called a Gasoline Shortage.

Between about 1975 and 1980, gas was strictly rationed in this country. The shortage began in the Nixon years when OPEC decided to shut off the pipeline. When Americans sensed there was a shortage, they raced to the gas stations and kept their tanks “topped off.” They began hoarding gas and it became much like the recent toilet paper crisis

With more gasoline in car tanks than at the actual pumps, there was a problem.

Along about this time, a peanut farmer from Georgia by the name of Carter, ran against Gerald Ford, announcing that he would be the most honest president ever, and would personally see to this shortage mess.

Carter instilled a national 55 mph limit and turned down the heat in the White House, wearing a sweater during his fireside chats when he lectured Americans for being too greedy.

But it had no effect, and Americans were beyond frustrated. Many feared leaving for vacation, unsure if there would be gas enough to get them to their destination. Gas stations opened only at certain hours, and according to the odd or even number on your license plate, customers could only buy gas on certain days, and in a limited quantity. It was a genuine mess, and Jimmy Carter suffered a crushing defeat in 1980 to a fellow named Ronald Reagan. Soon after Reagan took office, the gas crisis mysteriously went away.

I do not like to spend $100 to fill my tank with gas, but at least I have a choice. In 1979, the availability of gasoline depended on the day of the week and the number on your license plate.

I am Jim Brewer, Editor of the new CvilleBuzz, a humble on-line attempt to entertain those, not only … END_OF_DOCUMENT_TOKEN_TO_BE_REPLACED