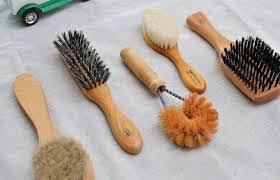 There was a time when Americans eagerly greeted a door-to-door salesman. He was welcomed into the home for a chat and maybe a cup of coffee – sometimes a bite of lunch. The well-respected visitor asked about the family and any news in the neighborhood, and then opened his case of wares. Most were brushes. He was, after all, The Fuller Brush Man

The Fuller Brush Man was a consummate professional, and always wore a coat and tie and usually a felt hat. He was thoughtful and considerate and if a customer was busy, he would make it a point to stop in again.

Fuller stood for quality. Their hairbrushes were unrivaled. There are still Fuller hairbrushes on many dressers today that were bought over 50 years ago. Started in 1906, the Fuller Brush Company grew steadily until World War II when the production lines switched from making hairbrushes to producing brushes to clean guns and weapons. After the war, Fuller began a hiring campaign with women as “dealers”, a move that would later be duplicated by Avon and Mary Kay.

Famous former Fuller Brush men include the Reverend Billy Graham. Imagine having Billy Graham in your living room showing you the latest clothes brush or floor cleaner. Graham became a Fuller brush salesman during the summer after he graduated from high school.

“I outsold every other salesman in North Carolina,” Graham would later write in his 1997 autobiography, “Just As I Am.”

Door-to-door salesmen were much more prevalent in the era from the 1950’s through the 1970’s. There were encyclopedia salesmen, vacuum cleaner salesmen, magazine salesmen and a host of others. In that time, people were welcoming and unsuspecting of danger or fraud. That’s because most people back then were decent and honorable. No one worried about opening the door of his or her home if a stranger called.

Fuller’s decline began in the mid-80’s when more and more women left the home to enter the work force. Fuller responded with a mail order catalogue, but things were never the same. Fuller recently filed for Chapter 11 Bankruptcy, with hopes that reorganization and new products will breathe new life into the company.

The Fuller Brush Man symbolizes a different time in our culture. A time when people trusted and respected one another and a time when products made in the United States stood for value and quality.

Here’s hoping that with reorganization, the Fuller Brush Company will be around another hundred years.

Stewball Was a Racehorse

I am Jim Brewer, Editor of the new CvilleBuzz, a humble on-line attempt to entertain those, not only … END_OF_DOCUMENT_TOKEN_TO_BE_REPLACED