You are here: Home / Boomer Memories / Fat Back and Bacon Grease 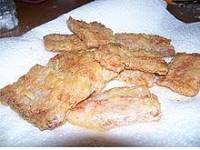 After my father was declared Missing in Action during World War II, my mother brought her infant son home from the hospital to live with my grandmother, Mama Ida, her sister Pearl, my mom’s sister Jodi and Uncle Sidney, Mama Ida’s brother. I suppose we would have been considered poor, but everybody pitched in and somehow, we got by.

Growing up, I remember that every dinner began with a slab of pork fat back sizzling in an iron skillet. Sometimes, fried fat back would be our only meat and always, it was used as the grease and seasoning for whatever Mama Ida was cooking.

Fat back, of course, is a cut of meat taken from under the skin of the hog’s back, thus “fat back”. We used the cut with the rind, while the fat part could be rendered in to a high-quality lard.

I loved to gnaw on the salty fat back, the fat side was tender and juicy and the rind extra crunchy. But it was good. The fat back grease would also serve as the oil for whatever was fried, and in the South, in the 1940’s, most everything was fried – potatoes, okra, greens, chicken, pork and fresh fish, when available. We also used the lard for cooking and baking, since Crisco had been in short supply during the war years.

When Mom remarried Daddy George, she sometimes cooked with fat back, but more often with bacon grease. We had bacon most every morning and there was always a small container on the stove with a sieve on top that held the bacon grease and filtered out the solid parts. We never put it in the refrigerator and only occasionally wiped off the sieve. Daddy or Mom would simply pour what grease they needed in the skillet and fry with that. An ordinary potato became a delicacy when fried in bacon grease and a mess of yellow squash with a sliced onion was an epicurean delight.

Today, the emphasis is on “fat free”, meaning “taste free”. We use extra light vegetable and canola oil, sometimes peanut or even coconut oil. Fat anything is frowned upon. But whereas fat back or bacon grease is 100% pure fat, they have zero carbs. Dr. Atkins would approve!

All I can say is that I can’t fathom cooking a mess of collard greens without a little fat back in the pot.

I am a southerner, you know.

I am Jim Brewer, Editor of the new CvilleBuzz, a humble on-line attempt to entertain those, not only … END_OF_DOCUMENT_TOKEN_TO_BE_REPLACED