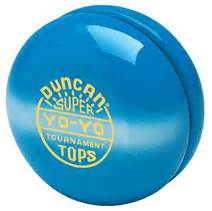 If you look closely at the middle finger on the right hand of an average Boomer, you may see the feint shape of a ring imprint embedded in the skin. That likely came from the ever-tightening string of a Duncan Yo-Yo, one of the most popular toys of Boomerhood.

But yo-yos were really more than just toys, they were instruments of wonder, so much so that a half-hour of school time was often devoted to see who could do the most difficult yo-yo tricks and who could make a Duncan Yo-Yo defy gravity for the longest period of time.

They say the yo-yo is one of the oldest known toys in recorded history. There are vase paintings from ancient Greece showing a child playing with what was believed to be a yo-yo dating as far back as 500 BC. But it was Donald F. Duncan who would popularize the yo-yo as a unique toy in America.

Duncan, who had made quite a name for himself in the business world with his line of Good Humor Ice Cream, bought the Flores Yo-Yo Company, along with the rights to the magic name “yo-yo” in 1929.

Duncan then introduced the looped slip-string, which allowed the yo-yo to “sleep” – a necessity for advanced yo-yo tricks.

A basic yo-yo had a string wound and secured on the spool and when the yo-yo was released, it came back up immediately when the string reached bottom. But with the looped string, the yo-yo would spin around the spool until tugged, and then would return to the finger.

The most basic yo-yo trick was called “sleeping”, when the yo-yo stayed down, spinning all the while. By bumping the spinning yo-yo along the floor, you were “walking the dog”, another basic yo-yo trick. Other more advanced tricks include the “breakaway”,  a sideways throw and the “forward pass”, always a crowd pleaser. The “flying saucer” was a sideways throw that could loosen or tighten the string and a “loop to loop” was in every yo-yoer’s bag of tricks. There was also a trick called “hop the fence” which was a series of regenerated throw downs.

A stunt called “around the world” left many scuff marks on 8-foot ceilings and more than a few runaway yo-yos spinning out of control as the string broke from too much force.

Duncan yo-yos were also instruments of beauty. The all-wood, original Duncan Yo-Yos were pained bright colors, sometimes with stripes or multiple colors. Some even came with rhinestones in the sides, which reflected lots of light during the tricks. Yo-yos were so popular when I was a boy, I can recall a yo-yo man who came to our school and would deftly carve our initials in each favorite yo-yo for a mere 50 cents. There were city champions named each year as well as statewide and national yo-yo competitions.

Duncan Yo-Yos are still made and sold today, but most kids today haven’t the foggiest idea what they are, much less what a yo-yo can be made to do with a little practice. I suppose modern kids are too busy talking, texting and playing video games on their cell phones to do something as mundane as “walking the dog.”

And that’s a shame.

I am Jim Brewer, Editor of the new CvilleBuzz, a humble on-line attempt to entertain those, not only … END_OF_DOCUMENT_TOKEN_TO_BE_REPLACED