You are here: Home / Backyard Birds and Buds / Mockingbird Visits 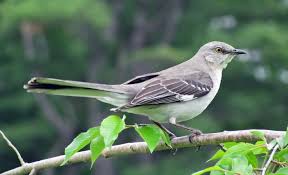 We’ve lived in our house over 45 years and there has always been one mockingbird that visits. Usually, they have nested in thick bushes in our neighbor’s yard and stop by our place only for a sip of water or when the blueberries and blackberries ripen. I feed all my other birds, but I’ve never been able to draw the local mockingbirds to my feeders, until a few weeks ago.

I wrote recently about a product named Peanut Log that I have been hanging instead of suet. The catbirds go nuts over it and it also attracts red-bellied woodpeckers, downy woodpeckers,  nuthatches, blue jays, titmice,  chickadees and – yes – mockingbirds. They come and settle on a nearby branch, wait their turn, then swoop in, land on the free dangling Peanut Bar, peck away and fly off. I am delighted that I have finally found something to draw in these interesting birds with amazing songs. Occasionally,  I’ll be in the yard, hear a mockingbird belting out a tune and simply stop and listen.

Mockingbirds hang in the neighborhood year round. They are attracted to open areas with hedges, fruiting bushes and thickets. They are supreme bug-eaters. A favorite tactic is to fly in, raise their wings and stir an insect into movement. Then, bingo, mockingbird food. During the summer, a mockingbird’s diet consists of beetles, earthworms, moths, butterflies, ants, bees, wasps, grasshoppers, and sometimes even small lizards. In the winter, they seek out fruits and berries.

According to the Audubon Society, Northern Mockingbirds are found alone or in pairs throughout the year. They make themselves easily visible, sitting and singing atop shrubs, trees, utility lines, fences, and poles. On the ground they walk, run, and hop along the ground, tail cocked upwards, grabbing at prey on the ground or snatching insects just over the grass. Mockingbirds sometimes fly up and hover to grab at hanging fruit. The Northern Mockingbird is aggressive throughout the year. Females typically fend off other female mockingbirds, while males confront male intruders. Males disputing territory boundaries fly toward each other, land near the boundary, and face off, silently hopping from one side to another. Eventually, one bird retreats and the other chases it a short ways. If neither bird retreats, they may fly at each other, grappling with wings and claws and pecking at each other. Mockingbirds are also territorial around other bird species as well as dogs and cats.

Next time you’re in Wal-Mart pick up a couple of these Peanut Logs and attract tons of our fine feathered friends and especially mockingbirds.

Birds of a Feather

I am Jim Brewer, Editor of the new CvilleBuzz, a humble on-line attempt to entertain those, not only … END_OF_DOCUMENT_TOKEN_TO_BE_REPLACED