You are here: Home / Backyard Birds and Buds / King of the Road 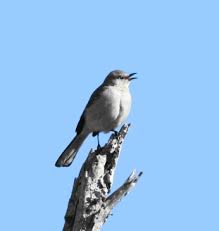 Drive along most any road or street in town and you’ll see one or more. They will be perched on a mailbox, a utility pole, a tall shrub or a tree limb, and ready to swoop down and nail an unsuspecting insect. They are mockingbirds, one of the most interesting of all backyard birds and one of the best singers on the planet.

This time of year, mocking birds stake out their territories, most having nests and little ones to feed. They fight other mockingbirds for squatters’ rights and they are not at all afraid to chase after an encroaching hawk or an aggressive crow. They are fearless birds and boy can they sing. Mockingbirds, particularly the males, sing endlessly, throughout the day and even into the night.

I have one mockingbird in my yard, but I have never seen him at my feeder. He will come and get a beak full of water from our birdbath, then it’s off to the hedges and limbs to ambush bugs. He will, however, visit my one blueberry bush. I don’t think I’ve eaten a single berry from that plant, preferring that the mockingbirds enjoy at least one thing from my yard.

Mockingbirds are known for their ability to mimic the calls of other birds – therefore the name mockingbird. They are also known for flashing the white patches on their wings, perhaps to intimidate an insect and cause it to move from its stationary position, then, wham! No more insect.

Mockingbirds are generally home-bodies, they rarely migrate once they find suitable habitat. Interestingly, mockingbirds have two songbooks. They sing from one of them from February through August, then switch to the second book in their choice of vocals from September through November. Totally different songs. In winter, they keep quiet. Too bad they don’t do Christmas Carols. That would be special.

Plant a Butterfly Bush (Milkweed, Too)

I am Jim Brewer, Editor of the new CvilleBuzz, a humble on-line attempt to entertain those, not only … END_OF_DOCUMENT_TOKEN_TO_BE_REPLACED