You are here: Home / Backyard Birds and Buds / In the Catbird’s Seat 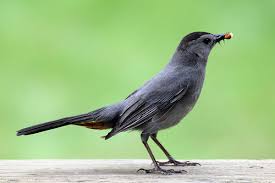 Like the swallows of Capistrano, they come back every year. My catbirds. They show up in early April, raise a nest of chicks or two, then they’re off for parts unknown.

For the past several years, a pair of catbirds has nested in a hedge behind our house. They are really quite interesting.

Some confuse catbirds with cowbirds. They sort of look alike, but catbirds are true songbirds while cowbirds – which lay their eggs in other birds’ nests – are rogues and members of the blackbird family.

The catbird is a lovely, graceful creature with a song that sometimes imitates the meowing of a cat – therefore the name. Catbirds, like mocking birds, will also mimic the calls of other birds. They are fairly friendly birds and don’t appear to be upset at the closeness of this human. The other day, as I was going back to the shed, a catbird with a fat juicy bug in its beak greeted me within ten feet, then moved aside, but wouldn’t leave. He or she may have had a nest closer than I thought.

The phrase, “In the catbird’s seat” is an old English expression meaning “in a superior or advantageous position”. That’s because catbirds frequently find the highest limb or most prominent perch from which to sing.

Red Barber, the fabled Brooklyn Dodger announcer, made famous that phrase when he used to describe a batter with three balls and no strikes as “sitting in the catbird’s seat.” The batter had the clear advantage because he knew the pitcher had to bring the next one over the plate.

Interestingly, catbirds are never fooled by a cowbird’s attempt at leaving eggs in their nests. If they see a cowbird egg, they break it immediately. Robins, sometimes, will hatch and raise a cowbird chick.

My catbirds generally hang around until September, and then depart. I enjoy their company and wish they would stay longer, but I’m glad to have them, no matter what.

The Blues Are Back

I am Jim Brewer, Editor of the new CvilleBuzz, a humble on-line attempt to entertain those, not only … END_OF_DOCUMENT_TOKEN_TO_BE_REPLACED