You are here: Home / Backyard Birds and Buds / Damned Deer 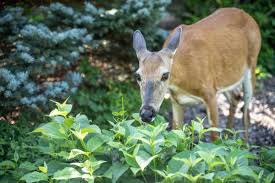 My long-time friend Wayne Ferguson lives in Charlottesville’s Dunlora subdivision and has been plagued by deer since the ink was dry on his real estate contract. Wayne, like me, is an amateur vegetable gardener and loves flowers in his yard, but so do the deer and there are a ton of them in Dunlora.

But this year, Wayne decided to stop the thieving whitetails and built a nifty cage with a top and all. Wayne has entered through a gate, weeded, watered and tended to what appeared to be one of his best crops ever. Unfortunately, last week, Wayne forgot to shut the gate one evening as he left. The next morning his garden was leveled. They ate everything – tomatoes, cucumbers, peppers, flowers, vines, leaves – everything!

All that work down the drain.

I’m guessing here, but if you happen to have a crossbow and asked Wayne if you could hunt in his back yard one day, I bet he would give you permission.

I am Jim Brewer, Editor of the new CvilleBuzz, a humble on-line attempt to entertain those, not only … END_OF_DOCUMENT_TOKEN_TO_BE_REPLACED