You are here: Home / Backyard Birds and Buds / Cardinal Wars 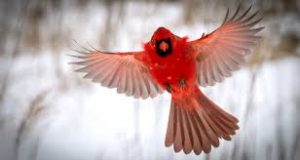 I’ve had a small flock of 8 or 10 cardinals throughout the winter. They visit all my feeders, but really prefer to feed on the seeds that hit the ground. They have been mostly ladies and gentlemen,  behaving themselves – until now.

But the red feathers are starting to fly. Within a few weeks my flock will winnow down to two pair – one will nest in the back hedge and the other along the fence. And they will skirmish frequently for preferred position and pecking order on the feeders.

I’m hoping one of the birds will be “Red” from last year. He and I made fast friends as I scattered meal worms in the garden near the bluebird house. The bluebirds ate most, but I made sure Red had a few to feed his wife and young’uns. He was the friendliest cardinal I’ve ever seen.

Cardinals begin nesting in April and usually have two clutches per year and they are lucky if just one bird per nest survives. The cardinals keep their distance from one another till all the young have fledged, then they begin to flock up again entering fall.

They are magnificent creatures. I wish that more than two pair would nest in the yard, but they have their own rules – so two it will be.

In the meantime, let the fighting begin.

I am Jim Brewer, Editor of the new CvilleBuzz, a humble on-line attempt to entertain those, not only … END_OF_DOCUMENT_TOKEN_TO_BE_REPLACED