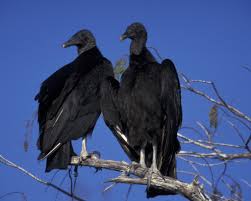 I heard the crows squawking last week and figured there was a hawk someplace close by. My three crows hate hawks. But high in the back tree were four buzzards. The crows continued fussing and eventually, the buzzards flew off, heading for a gut pile I suppose.

It’s been a really good year for buzzards. There have been lots and lots of deer carcasses piled up beside the highways. And buzzards do us a great service. They keep carrion to a minimum.

But I worry a little about the surge in black buzzards, the ones that were in my back yard.

We have two types of buzzards in Virginia, the more common Turkey Vulture, with a red head, and the Black Vulture, a slightly smaller bird with an entirely black head.

The Black Vultures are the more aggressive of the two. They will attack and eat living animals, particularly the young of the year, and when they set up shop in a tree near you, it’s not a pretty nor good-smelling situation.

Black Vultures soar high in search of a scent, but their sense of smell is less developed than their cousins, the Turkey Vultures. Therefore, they combine their forces and search and feed in flocks, whereas the Turkey Vulture usually feeds alone. Because of superior numbers, the Black Vultures will chase away the solitary Turkey Buzzard when a kill is discovered.

Interestingly, turkeys and buzzards are distant relatives, hence the name turkey vulture. But the buzzards are nasty birds. They actually poop on their own legs to keep cool.

Next Thanksgiving, I think I’ll pass on the turkey legs and have a slice of breast instead.

On the Watch For bluebirds

A Bunch of Horse Manure

I am Jim Brewer, Editor of the new CvilleBuzz, a humble on-line attempt to entertain those, not only … END_OF_DOCUMENT_TOKEN_TO_BE_REPLACED