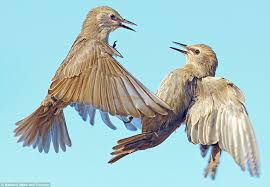 I saw a male bluebird chasing a chipmunk this morning. There’s a first for everything, but my backyard has been filled with high speed chases for the last two months. The first chase involved yours truly, when I sprinted after a hawk that had dive bombed my bluebirds. I don’t sprint well, by the way, and almost fell flat on my face. That would have been ugly.

The bluebirds chase most anything that nears their nest on the fence, including and especially squirrels, and the squirrels chase each other. Round and round the tree they go, one hiding from the other. Eventually they give up and return to their normal mischief making. The crows chase hawks, as do the blue jays. The grackles chase the crows. Grackle eggs and baby grackles in the nest are among a crow’s favorite foods. Robins chase each other, and I chase the robins if they get in the bluebird food bowl. Rabbits are also chasing each other, but my suspicions are that at least one doesn’t want to fight, rather to procreate more rabbits.

And the hummingbirds? Talk about chasing? These tiny birds are warriors. They guard their adopted hummingbird feeders like Shaquille O’Neal once guarded his basketball goal. They fight and chase each other practically all day long. I haven’t seen a hummer at my feeders so far this summer, but I suspect they’ll show up any day.

Cardinals are also battlers. They are very territorial. If one male cardinal enters restricted airspace, the red feathers fly. After the nesting season, cardinals patch up their differences and hang in small flocks, called vaticans. Even the gorgeous goldfinches like to duke it out, especially if the wrong stranger attaches himself to the thistle feeder.

Birds are very confrontational this time of year. Their very survival often depends on it.

I am Jim Brewer, Editor of the new CvilleBuzz, a humble on-line attempt to entertain those, not only … END_OF_DOCUMENT_TOKEN_TO_BE_REPLACED