You are here: Home / Around Town / Statue Suggestion 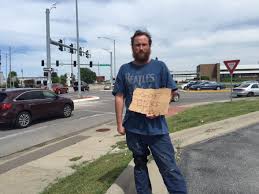 In case you haven’t been paying attention, the City of Charlottesville is not happy with their inventory of historical statues. Until a judge ordered otherwise, they had draped a huge black tarp over General Lee and his horse, Traveller.

I have a great idea for the City Council. Why not erect a statue of something that is becoming increasingly more common around Charlottesville – that of a beggar on one of the many major intersections of town.

There was once a time when you might see someone holding a sign saying, “Will Work for Food.” That was a reasonable request.   But no more. Young, healthy males – I saw a kid who couldn’t have been 20 yet – are standing on 29 North with cardboard signs saying something like, “Anything Helps.”
I tell you what would help. A job. We have basically zero unemployment in Charlottesville at this point. Lawn maintenance people can start out at $15 an hour. That’s $600 per week for those without calculators. Apply for a job in the back of a restaurant and they will have an apron on you before you can escape.

We all feel sorry for those truly in need, those who are unable to work and those without homes. But there is already a place for those people. The Salvation Army. They don’t charge a dime for food or housing, but there’s a catch. You have to be clean – no drugs and no alcohol, and that apparently is a deal breaker for many in Charlottesville’s community of beggars. Odds are great that that five-dollar bill you hand them will buy drugs or a pint of vodka that very evening.

But you know, anything helps!

I am Jim Brewer, Editor of the new CvilleBuzz, a humble on-line attempt to entertain those, not only … END_OF_DOCUMENT_TOKEN_TO_BE_REPLACED