You are here: Home / Neat Stuff / The Best-Ever Frozen Biscuits 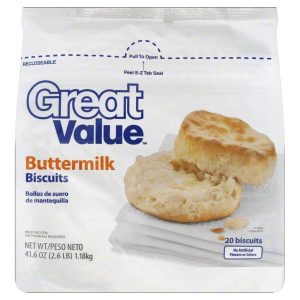 I had a breakfast planned for country ham and eggs, and everybody knows you need biscuits for that. I can make biscuits from scratch, but I’ve found that the frozen biscuits are an adequate substitute, and a whole lot easier to prepare. Plus, if you only need 8 biscuits, just take 8 out of the package. I was in the Wal-Mart grocery section and I wanted a package of 12 Pillsbury Grand Biscuits, but they only had packs of 20 – more than I needed. But they did have a package of 20 biscuits that was less expensive than the Grands. They were Great Value Frozen Buttermilk Biscuits, Wal-Mart’s own brand. I decided to try them.

I popped ten in the oven that morning and they were far and away the best frozen biscuits I have ever had. They were light, fluffy and delicious. They even rival homemade-from-scratch biscuits.

In preparation, I simply put the biscuits on a sheet pan touching so they would rise better and be lighter and cooked them at 350. Really, they were incredible.

Frozen biscuits have only one disadvantage and that’s the time it takes to cook. The package may say 22 minutes, which usually translates to 28 or more minutes. I try to cook them at a lower temperature and just watch until they are golden brown. I believe I cooked these biscuits at 350 for 30 minutes, about the length of time it takes to fry some country ham and scramble a mess of eggs.

The nice thing about frozen biscuits is the convenience. If you have unexpected company and need bread for breakfast (or dinner), toss a few in the oven and you’re good to go.

Next time you’re in Wal-Mart, buy a package of this product – Great Value Frozen Buttermilk Biscuits and you’ll be locked and loaded for most any breakfast. And they are good!

I am Jim Brewer, Editor of the new CvilleBuzz, a humble on-line attempt to entertain those, not only … END_OF_DOCUMENT_TOKEN_TO_BE_REPLACED