You are here: Home / Chuckles / Pancakes: Aunt Jemima vs Bisquick 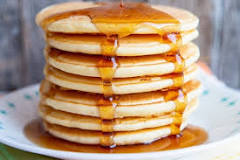 In this corner, we have the undisputed leader in sales of pancake mixes –  the one and only Aunt Jemima Original Pancake Mix, a 32-ounce box of pancake goodness.

In the other corner, we have the contender – a box of Bisquick Mix. So, who’s the baddest pancake mix on the planet?

On Sunday mornings, Nancy and I often splurge on breakfast. We’ll have bacon or sausage, cut up some fresh fruit, sometimes we have grits and either waffles, pancakes or French Toast. We end up stuffed like pigs, but it lasts us until suppertime. I almost always have a box of Aunt Jemima Original Pancake Mix on the shelf and go to that. But last week, I pulled out my box of Bisquick Mix and wondered which made the best pancakes.

Hands down, Bisquick makes the best pancakes, but it’s not really fair. With Aunt Jemima Original, all you add is water and how can “just water” compete with a mix that includes a couple eggs and milk?

When you whisk together the two eggs, a cup of milk and two cups of Bisquick, the pancakes are fluffier and much richer in flavor.

The secret is to not beat the batter into oblivion, but just whisk together until blended, even a little lumpy.

Aunt Jemima does have a mix that would include eggs and milk and that probably pans out about the same as Bisquick. But Bisquick takes the prize over Aunt Jemima Original.

Try it and see for yourself.

Murphy’s Law on Cracking an Egg

I am Jim Brewer, Editor of the new CvilleBuzz, a humble on-line attempt to entertain those, not only … END_OF_DOCUMENT_TOKEN_TO_BE_REPLACED