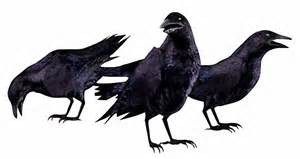 When I was in college I drank Old Crow bourbon. It was all I could afford, but it was (and still is) actually a good value and a decent bourbon.

I currently have three old crows in my backyard. Not liquid crows, but feathered ones. They stop by daily to dine on scattered birdseed and I welcome them to my yard.

While crows can be pests, especially in a farmer’s cornfield, they are handy to have around in a neighborhood.

There was a huge red tail hawk in our yard recently – he actually nailed a squirrel and that takes a pretty decent size bird to do that. Red tail hawks can weigh up to 3 pounds with a wingspan of up to 52-inches. Hawks also will work on doves and other songbirds. I don’t want hawks killing the birds I enjoy watching and feeding, so I try to entice and retain the crows. When the hawk shows, the whole neighborhood knows about it because of all the racket the crows make. The squawk, they holler, they fly from limb to limb, all the while protesting the hawk’s intrusion. It’s a little like having three mothers-in-law nagging at the same time. The hawk then figures he would rather have a little peace and quiet than even a tender dove breast and he hightails it for parts unknown.

Crows happen to be among the most intelligent birds of all. They have a vocabulary larger than some teenage humans. They are also very family-oriented. Younger crows often refrain from breeding themselves and will instead help their parents tend to their young. Crows have been known to mourn the loss of a family member.

I have seen crows raid bird nests in other areas, but not in my backyard. Perhaps they are thankful that I feed them corn and seeds on a regular basis. I would most definitely rather have three old crows than one hawk.

I am Jim Brewer, Editor of the new CvilleBuzz, a humble on-line attempt to entertain those, not only … END_OF_DOCUMENT_TOKEN_TO_BE_REPLACED