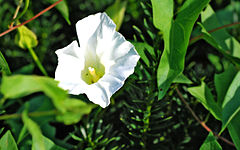 Morning Glories are night people. They bloom and party and carry on all night, and when daytime comes, they close up shop and snooze all day. But if you get a peek at them before they tuck themselves in, they are certainly pretty things.

Recently, I have been seeing a few morning glories growing wild on the sides of the roads. These special places often hold many wildflowers and plants you would not see otherwise. That’s because the roadsides aren’t sewn in fescue. They were originally just raw dirt and wild things grow and prosper in dirt, but not in fescue grass, which crowds out every other lifeform.

There are over a thousand different plants under the heading, Morning Glory, so it’s a big family. Many people raise and cultivate Morning Glories – they bloom in a wide range magnificent colors, but the pretty flowers are definitely not welcome in a garden. They are truly invasive and the roots go so deep, they are very difficult  to get rid of.

It seems every time I have a little garden spot, morning glories manage to sneak in. I suppose birds do the planting. They are so pretty I hate to pull them up, but if you don’t, it’s bad news for the beans and tomatoes. The little rascals love to climb corn stalks. I think it’s their favorite means of support.

Like many other wildflowers, morning Glories have a variety of uses. In China, the seeds have been used as laxatives for thousands of years. Aztecs priests used Morning Glories as hallucinogens. They were also been used to form a latex substance similar to rubber, but way before. The invention of rubber.

Interesting plants, they are, but not in a garden.

I am Jim Brewer, Editor of the new CvilleBuzz, a humble on-line attempt to entertain those, not only … END_OF_DOCUMENT_TOKEN_TO_BE_REPLACED