You are here: Home / Weeds and Wildflowers / Common Daisies 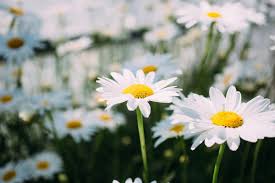 They are called common daisies, but there is nothing ”common” about them. The delicate white and yellow flowers – usually growing wild – are among nature’s most lovely and they are just beginning to bloom along our roads and bi-ways.

Daisies are flowers you would normally find in a meadow – if we still had meadows. Mostly, we don’t. We now have thick stands of fescue grass across most of our green places and nothing can grow in fescue but fescue. It is the single most useless ground cover of all – and it is largely the result of a federal government that not only paid – but demanded – that it be planted by many farmers. A meadow, though, has welcoming warm season grasses that harbor and shelter both wildlife and plants. Plants such as the common daisies, Bellis Perennis.

Bellis (beautiful) and Perennis (everlasting) well describes the lovely daisies with snow white petals and solid yellow centers. The English Daisy was considered to be a flower of children and innocence. The hippies – the flower children of the 60’s – used daisies for necklaces.

Like dandelions and buttercups, daisies are not welcomed in most yards. They are, in fact,  difficult to eradicate by mowing and are treated as a weed. But like many of our “weeds”, they are beautiful and have many uses.

Bellis perennis has astringent properties and has been used in herbal medicine. In ancient Rome, the surgeons who accompanied Roman legions into battle would order their slaves to pick sacks full of daisies in order to extract their juice. Bandages were soaked in this juice and would then be used to bind sword and spear cuts.

Daisies are, in fact, still used in homeopathy for wounds and after certain surgical procedures, as well as for blunt trauma in animals.

I am Jim Brewer, Editor of the new CvilleBuzz, a humble on-line attempt to entertain those, not only … END_OF_DOCUMENT_TOKEN_TO_BE_REPLACED