You are here: Home / The Outer Banks / No Strangers on a Pier 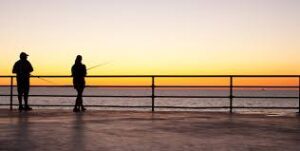 There is no such thing as a stranger on a pier. They are part of your family. For that day or that hour, you are blood kin, connected with the joy or disappointment of catching fish. If one catches, all bring fish over the rail. If only the crabs are nibbling the baits and no rod tips bend forward, everyone on the pier shares the same fate. But there are no strangers. The fellow beside you becomes your brother.

On an otherwise casual afternoon, I drove to the causeway to Mateo and lugged my tackle box and rod to the bridge pier. There I met a fellow named Henry. We exchanged pleasantries then came the eternal fishing question:

“I usually fish from the other side of the pier, but they closed it off.”

“Shouldn’t make any difference. The wind is in our favor.”

“Where are you from?

Henry said he was from Charlotte and we both agreed how much that city has grown and how awful the traffic. Henry said he had been coming to the Outer Banks for 12 or 13 years. His family gets together annually and rents a big cottage in Kill Devil Hills, and there were 20 staying there this week.

Then our discussion turned to fishing. We shared tips and memories, special spots and baits that had been successful.

Henry’s rod tip twitched a bit and he pulled a frisky pinfish over the rail, then tossed it back. Nothing much was messing with my GULP jig. I was hoping for a trout or a drum. A kid at the end of the pier scooted some Ratt’l Traps beneath the bridge and pulled out 12-inch rockfish on most every cast. They were all throwbacks. He also caught a 20-inch flounder, but they were not in season, and he eased it back into the sound.

Others on the pier stopped to chat as they came or went. Two older gentlemen to the side were using bobbers and cane poles and caught 3-inch pinfish by the hundreds, literally. They threw them all back. They were just having fun fishing on a pier where you never meet a stranger.

I am Jim Brewer, Editor of the new CvilleBuzz, a humble on-line attempt to entertain those, not only … END_OF_DOCUMENT_TOKEN_TO_BE_REPLACED