You are here: Home / The Garden Spot / Pole Bean Beans 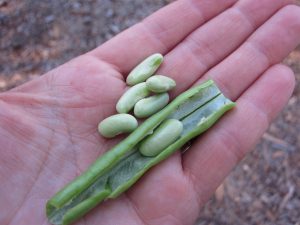 I had neglected my garden, having gone to Urbanna for an extended weekend. Last Saturday, Nancy was off and saw some pole beans on my vines. It turns out there were lots of pole beans and she picked two pecks – at least I think they were pecks. They were large baskets, and the two combined equaled maybe a half bushel in all. It was a bunch of beans, I know that.

We sat down and proceeded to string and snap the beans, but I noticed some were too ripe for snapped beans, so I decide to shell them. I have never done this before but I remember that my friend Sherman Shifflett had said he had shelled some pole beans.

I have shelled sweet peas, lima beans and black-eyed peas before, but never green beans so this would be a first. I shouldn’t have let the beans go that long before picking, but it turned out to be a god-send. I ended up shelling enough mature beans for about a pint.

One of my favorite things to eat is a batch of pinto beans cooked with fat back and lots of salt and pepper. And that’s how I cooked these fresh beans. I cooked them for over an hour, adding water as necessary and they were delicious. Much fresher and juicier than dried beans. In fact, I think I like them better this way than snapped. It would be almost impossible to find these at a store, so you have to grow your own – just let the beans ripen a bit, shell them and enjoy.

It makes a garden almost worth the effort and expense.

Three In A Row

I am Jim Brewer, Editor of the new CvilleBuzz, a humble on-line attempt to entertain those, not only … END_OF_DOCUMENT_TOKEN_TO_BE_REPLACED