You are here: Home / The Garden Spot / Hybrid English Cucumbers 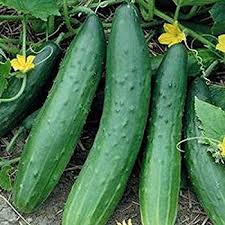 This spring I planted four hybrid cucumber vines I bought from the Corner Store Garden Center in Ruckersville. They are Sweet Success Hybrid Cucumbers which grow and resemble English cucumbers – long and straight. The damned rabbits nearly mowed down three on my young plants before I could put netting over them, but one vine is doing great and the others are making a comeback. About a week ago, Nancy picked the first cuke off my healthy vine. It was about 6-inces in length, but it was a “baby”.

“They get much larger,” I told my wife. Yesterday, I picked a larger one. The thing was at least a foot long and felt like it weighed a pound.

Nancy thought it too big, but I peeled it, cut it into slices, added some Vidalia onion slices and white vinegar and we had some delicious cucumber and onion salad last night. Even with its size, the cucumber was sweet and tender and just plain delicious. Nancy has had luck with bush cucumbers in her patio garden, but I intend to stick with these hybrids. They are really good.

Here are some specs on this variety: The mildest cucumber on the market, this early variety produces 10-inch long slicing cucumbers that are completely burpless, with no bitterness. Excellent sliced, but also fine for pickling when picked at a slightly smaller size. High yielding. This vining cucumber will appreciate growing up on a trellis.

Pick the cucumbers whenever they’re big enough to use. Check vines daily as the fruit appear because they enlarge quickly. The more you harvest, the more fruit the vines will produce. Oversized fruit is bitter. Cucumbers with a yellow end are overripe. Harvest using a knife or clippers, cutting the stem above the fruit.

Fellow gardeners try a few of these vines next spring.

A Time To Sow

I am Jim Brewer, Editor of the new CvilleBuzz, a humble on-line attempt to entertain those, not only … END_OF_DOCUMENT_TOKEN_TO_BE_REPLACED