You are here: Home / The Garden Spot / Growing Okra Trees 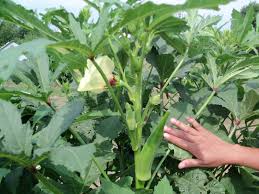 I don’t have okra plants. I have okra trees. Several are over 8 feet tall. I have to pull them over and stand on tiptoes to snip off any ripe pods. But I’m not complaining. I have had a bumper crop of okra this summer, and they are still producing!

Okra and peppers, I have discovered, are two vegetables that don’t like cool weather. The later you can wait to plant the okra, the better they do. I believe it was around the first week of May when I finally sewed 5 short rows of okra and they have done famously.

Okra plants need lots of sun and they obviously like a little composted manure mixed in with garden soil (which is what I have). I pick 15 or 20 pods every day, and by damn, you better pick every day. A 3-inch pod will be a foot and a half long if you leave it on the vine for a couple of days, and then they’re almost worthless. However, fellow gardener, Bill Hitt, says he uses overgrown okra pods in soups in stews to enhance the flavor and add a little fiber. But every day after work, I take my scissors down to the garden and cut off the ripe pods.

Lots of folks don’t like okra, but that’s only because they have never tried fried okra. Most have only sampled it in stewed dishes, where it’s gooey and slimy. I don’t mind it like that, but I prefer it fried.

Fried okra is one of my favorite dishes. My grandmother, Mama Ida, used to always have fried okra when I came to visit her in Raleigh. She started with some fried fatback for grease, then put the chopped okra in some stone ground corn meal and fried until they were medium brown. I could eat as many as she could cook.

I always plant Clemson spineless okra; it seems to do better in this climate. Next summer, plant some okra and try it fried, right out of the garden. After that, you too will have okra trees in your garden.

How Does Your Garden Grow?

I am Jim Brewer, Editor of the new CvilleBuzz, a humble on-line attempt to entertain those, not only … END_OF_DOCUMENT_TOKEN_TO_BE_REPLACED