You are here: Home / The Garden Spot / Creasy Greens Update 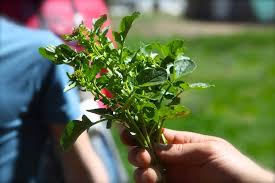 Bet you thought I wouldn’t write any more about creasy greens, but you would be wrong. I’m sure hundreds and hundreds are out there dying for a creasy greens update, so here it is.

The creasy greens saga began last spring. My wife Nancy had received a large bag of creasy greens seeds from her cousin, Billy, as he remembered his father and Nancy’s mother cutting and eating the succulent greens many years ago. Nancy planted some in one of her raised beds, and I scattered the rest of the bag at the upper end of my garden, which gets precious little sun and not much grows. The seeds never germinated, but I left that spot alone and then noticed the creasy greens growing last fall when the ground turned cool and moist. A bunch of the plants sprouted. They grow in little clusters.

I didn’t know much about the greens, wrote about them and lots of folks responded.

Creasy greens are a poor man’s water cress. They are very hardy plants and grow wild in many places. Once a creasy green plant flowers and goes to seed, that space will continue to produce the greens.

Ideally, you plant creasy greens in the fall and harvest them early the next spring before they bloom. After they bloom, the greens turn too bitter to eat, but they produce lots of seeds, which will spring up if left untended.

I have been munching on my greens for the past month or two, cutting off a few sprigs for salads. They are rich tasting, sort of “nutty” in flavor.

Finally, last week, I cut a bunch and cooked them as “greens”. They were pretty good. I basically fried them in a little bacon grease, which gave the greens tons of flavor. The only drawback was that I took them up too soon and they were almost cold when we finally ate them. They need to be served hot on the plates and eaten immediately.

Next time, I think I’ll use just a teaspoon of bacon and toss in a pat or two of butter.

But they have a very nice flavor. I am hoping to try to establish a permanent creasy greens bed by allowing several plants in my upper garden to go to seed.

Three In A Row

I am Jim Brewer, Editor of the new CvilleBuzz, a humble on-line attempt to entertain those, not only … END_OF_DOCUMENT_TOKEN_TO_BE_REPLACED