You are here: Home / The Garden Spot / Abe Lincoln Tomatoes 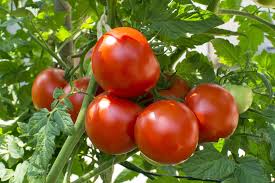 My Daddy always said that it didn’t matter when you planted tomatoes in your garden, they all came in at the same time. Meaning….. for a few short weeks in the summer, you’ll have tomatoes coming out of the wazoo, and then it’s back to eating plastic tomatoes from the grocery store.

But I believe I’ve solved the tomato glut problem,

This spring, my Nancy started a patio garden at the top of our driveway with lots of sun. She planted cucumbers and tomatoes, then peppers. Plants in pots always come in earlier because the soil gets warmer, quicker. But you have to water religiously or they plants will wither and die. Nancy watered daily and, very early in the summer, we were picking cukes and tomatoes from her garden. Then, my tomatoes, Abraham Lincoln tomatoes, came in.

A hybrid, the Abe Lincoln tomatoes seem to enjoy hot weather, not the earlier part of summer. So about the time Nancy’s vines ceased to produce, my tomatoes hit their stride.

I only had three vines but I picked close to 100 tomatoes and I still have a dozen on the vines.

The first Abraham Lincoln tomato vines I bought were from Snow’s, but they didn’t have any this spring, but Holzinger’s did. A friend, Mark Scott, had read my previous article about Abe Lincoln’s and bought several plants from Holzinger’s and shared with me.

Fellow gardeners, if you want to eat fresh tomatoes over several months instead of several weeks, start some vines in pots in early April, and then plant Abraham Lincoln tomatoes in May in your garden and you will have tomatoes to spare for a long time.

I am Jim Brewer, Editor of the new CvilleBuzz, a humble on-line attempt to entertain those, not only … END_OF_DOCUMENT_TOKEN_TO_BE_REPLACED