You are here: Home / Saltwater Report / Sailfish On the Piers 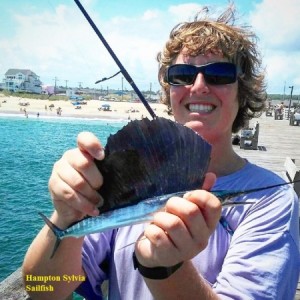 No need to charter a boat and motor 30 miles to the Gulf Stream to catch a sailfish. In Nags Head, the water is so warm this week in the surf that several sailfish, though small, were caught off the piers.

Southeast breezes raised the water tempearture to the upper 70’s, according to TW’s Tackle in Nags Head.

Here is their report:

Surf: Spot, Sea Mullet, Pompano and Flounder and Bluefish are being caught along the beaches.

Pier Fishing:   No one knows what’s biting this morning at Avalon Pier. They are too busy.

It was another good day of bill fishing on Wednesday. Offshore anglers also pulled in limits of tilefish and dolphin and a couple of yellowfin tuna hit the decks.

Inshore, cobia get the nod again this week as decent numbers of fish are keeping most cobia hunters content. Many fish are in the 50- to 60-pound class, with small pods becoming more common in open water as well as on structure.

Schools of big red drum are still meandering near the entrance of the Bay and along the beaches, providing good opportunities for casters. Spanish mackerel action remains excellent, with an exceptional number of big fish in the mix. Anglers trolling small spoons caught some huge mackerel. Small bluefish are also a given when trolling. King mackerel anglers are still waiting for the bite to materialize, with only a few catches to report. On the other hand, there are tons of sharks along Virginia’s coastal waters.

The flounder bite is hit and miss. Some respectable fish are responding to jigs and live bait along structures in the lower part of the Bay. Drifters are boating keepers to 20-inches along drop-offs and channel edges. Offshore and near shore wrecks continue to hold some willing flatfish, along with nice size sea bass. The Rudee Inlet flounder action is good, with a few decent flatties and plenty of throwbacks hitting gudgeons.

Nice spadefish are still available along the northern span of the CBBT, around the four artificial islands, and on many inshore structures. It’s been a great sheepshead year, as big fish continue to strike crabs, clams and fiddler baits presented along the pilings of the CBBT. Many of these fish exceed 12-pounds. Triggerfish are also competing for these same offerings.

Some speckled trout, along with scattered catches of spot and croaker are available in most lower Bay inlets, while anglers fishing in Oyster are filling coolers with croaker from the backwaters. Sea mullet are still available near the concrete ships and Fisherman’s Island Inlet. Tarpon are active in the backwaters of Oyster, with plenty of sightings, and a few jump-offs reported this week.

Amberjack are available near offshore wrecks and at the Southern Towers, but there is little interest due to the good offshore action.

Offshore, the billfish action is on the rise with multiple white marlin releases, a few blue marlin encounters, and even some sailfish action. Trollers are having the best luck near the Cigar, while live-baiters are scoring better in the Norfolk Canyon where a few nice yellowfin, wahoo, big dolphin and big eye tuna are also available.

On Tuesday, there were lots of Bluefish in the morning at the Point. During the afternoon a couple of keeper Flounder, Bluefish and Pompano were beached. The evening bite included Spanish, bluefish and big sharks. Hunter Durrer caught and released a 6-foot Black Tip shark. Avon had Croakers, Sea Mullet, and a few Spanish.

Inshore anglers kept busy on Wednesday with catches of Spanish mackerel, King Mackerel, Bluefish, Speckled Trout, Sea Mullet, and Red Drum. A lucky angler gigged a 14-lb. Sheepshead. Offshore, one Sailfish was released. Some bailer and gaffer Dolphin were caught. The Wahoo bite was good. Some boats returned with nice catches of Blackfin Tuna and a few Yellowfin Tuna.

John Canning of Hatteras caught a 41-lb. citation Grouper on the Reliance.

Jackson Jones of Leonardtown, MD had a 52-inch Red Drum release while aboard the Hang On.

The Rocks are Rocking!

Hot Fishing on the Outer Banks

I am Jim Brewer, Editor of the new CvilleBuzz, a humble on-line attempt to entertain those, not only … END_OF_DOCUMENT_TOKEN_TO_BE_REPLACED