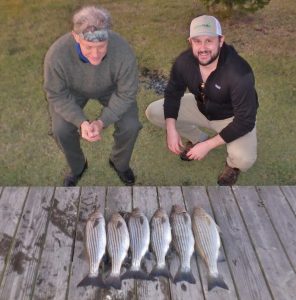 While Virginia striper fishermen are experiencing a little rough going, the striper fishing around Nags Head has been red hot.

There have always been stripers back in the sounds behind Nags Head, but the fish have generally run small – lots of throwbacks and few over 20-inches. All of a sudden, that has changed. Anglers are catching some very nice sized stripers in the sounds and lots of them.

Capt. Reese Stecher of Beach Bum Fishing said that just when he thought it couldn’t get better, it did.

“When the water got cold from the front that passed through, the stripers went berzerk. They got fat and the bite has been great. We clobbered them on Saturday, had a real good bite on Sunday, and yesterday afternoon we wore them out.  We have had 24-plus inch fish every trip and up to 26 1/4 inches.”

Last weekend, it was more of the same.

“The fishing could not have been better. Two times today we had “Da Birds.”  Didn’t need them though as the bottom was covered with fish in several places. Jigging, trolling, it didn’t matter. Everywhere you looked the people were catching stripers. And, there were some really nice fish. I had concerns that the three day storm might have moved the fish. Wrong! They were chomping this afternoon. Most of our fish came casting crank baits.”

Virginia speckled trout action continues to be outstanding. Trout are being caught throughout the lower Bay, in all three inlets and in the surf along the oceanfront. Long Bay Pointe Bait and Tackle said there has been good action inside Long Creek for the past two weeks.

Striped bass are being caught throughout the lower bay around bridges and piers with lights.

Sea bass, tautogs and flounder are available around all of the ocean wrecks. The sea bass season closes January 1st. Togs should be available inside the bay, on the Cape Henry wreck and at the CBBT islands.

Offshore trollers have enjoyed some nice bluewater action catching excellent numbers of tuna and wahoo. Tilefish are available at the Norfolk Canyon.

There has been a nice speckled trout run along the beach. Anglers are using artificials and the best action comes at dawn and dusk. Sea mullet and puppy drum are also being landed on bottom-rigs.

Sound-side anglers are catching limits of speckled trout along grass banks and in the deeper channels near the inlet. Bluefish are being caught near the inlet.

Striped bass are showing up in better numbers around areas with structure, such as bridge pilings and docks.

Sheepshead are being landed by anglers fishing baits along the Oregon Inlet Bridge pilings.

Bluefish Are In the Bay

Flounder On The Way

Sailfish On the Piers

I am Jim Brewer, Editor of the new CvilleBuzz, a humble on-line attempt to entertain those, not only … END_OF_DOCUMENT_TOKEN_TO_BE_REPLACED