You are here: Home / Saltwater Report / Fishing Out of Urbanna 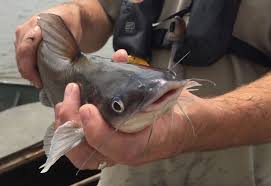 Urbanna is strategically located on Urbanna Creek, about a quarter mile from the Rappahannock River. Because the Rappahannock is relatively narrow, water flows are stronger and the river flushes easily. Of all the Virginia tidal rivers, the Rapp is the cleanest and purest and offers some of the best fishing in the state. Striped bass, in particular. Many stripers never leave the river. They are permanent residents. The creeks and tributaries are homes to lots of young stripers, 2 and 3 year old fish. Too small to keep, but fun to catch.

In years past, I have fished out of Urbanna Creek into the Rappahannock, down to the Route 1 Bridge and out to the mouth of the Bay as well as five miles back upriver. Sometimes we catch stripers, sometimes not. Saltwater fishermen are subject to the whims of the winds and the tides, but as a rule, if you can find baitfish, you’ll find stripers.

Currently, baitfish are all over the place making it hard to zero in on the large schools of stripers. As winter approaches and water temperatures drop, baitfish tend to congregate in “balls” and that’s when it all happens. Schools of striped bass rip into the bait and gorge themselves as they prepare to leave the bay and winter in the ocean.

We fished last weekend in Urbanna. With the exception of a couple of small fish, the stripers skunked us, but not the catfish. On Thursday afternoon, Tim Tigner and I were fishing from a deep-water dock when I tied on a Berkley GULP jig, intending to cast for stripers, speckled trout or perhaps puppy drum. While I was lighting a cigar and the bait was at rest, the line shot out and I hooked into a nice two-pound blue catfish. It helped that the water was cloudy after some brisk winds because catfish are light sensitive and feed more aggressively in dirty water. We pounded them for three days, and everything was caught on GULP baits.

Catching those catfish really increased my confidence in Berkley’s GULP baits. The lures catch fish as sight attractors, but also work just as well as live bait – a piece of shrimp or a bloodworm. Berkley says that GULP has been scientifically proven to be able to out-fish live bait. It expands a fish’s strike zone by up to 400 times. With extreme scent dispersion, the attraction is magnetic. The stuff works is all I can say and I intend to load up both my fresh and saltwater tackle boxes before next season.

Tim and I also got into the white bass, a miniature version of a striped bass. The largest we caught was maybe 10-inches, but they fight hard for their size and they are delicious on the dinner table. We caught all our white bass on three-inch jigs. My most effective color combo was a yellow and orange combination, but plain white worked, too.

The white bass are shallow water feeders, usually in three feet or less. They work in schools over grass and oyster beds and they are really, really good eating fish.

One night, we tried setting out a neon green underwater light that supposedly draws in fish from long distances. It drew in lots of baitfish, but the stripers never showed. I suppose they weren’t around.

The striper season in the Chesapeake and tidal tributaries runs through December 31, so maybe I’ll get another shot at this elusive species. If not, I know a good skipper in Nags Head.

I am Jim Brewer, Editor of the new CvilleBuzz, a humble on-line attempt to entertain those, not only … END_OF_DOCUMENT_TOKEN_TO_BE_REPLACED