You are here: Home / Articles From the Past / Action Heating Up 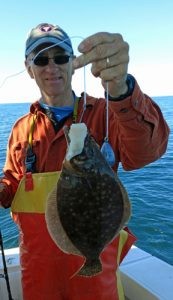 Flounder have started to bite behind the barrier islands of the Eastern Shore and some have been caught inside of Back River. Rod and reel croaker catches are being made from the fishing piers and in the rivers.

So far, the best bay bite has been tautog. These structure-oriented fish have entered their spring feeding frenzy. The fishing will be great through the month of May, but anglers only have this month to catch them as the season is closed as of May 1. The CBBT has been the best location, but any wreck or reef in the bay is producing. The coastal wrecks are also producing tautog, but sea bass have to be waded through at these locations to get to the togs.

Offshore bottom fishing is producing nice catches of tilefish. Spiny dogfish are still a problem, but they are starting to move out. The sea bass are not moving out and you still have to release those that you catch. The sea bass season is scheduled to open on May 15, but that is subject to change, so keep an eye on those regulations. Nobody is sure what the recreational sea bass regulations will be this year.

The wind has been the most persistent fishing story. That and the return of winter-like temperatures have severely limited fishing activity. When boats can get out, Bluefin tuna have generated most of the excitement.

Drum have move into the seaside surf of the Eastern Shore. More black drum than red drum are being caught so far with more red drum moving in every day. The red drum bite has been great out of Hatteras over the past week. Virginia’s bite will catch up over the next couple of weeks and by May, it will be red hot.

Puppy drum and speckled trout are being caught inside the inlets. It is time for them to show up on the flats of the western side of the bay. A few pups and specks have been caught here already. Both speckled trout and gray trout have shown in gillnet catches in the Hampton Roads area.

TW’s said it was a great day to be fishing on the Outer Banks this Wednesday. There were big Bluefish at the point, plus big Drum. Avon Beaches and Rodanthe had plenty Sea Mullet and some Drum. Buxton anglers caught Puppies, and Sea Mullet. Frisco and Hatteras beaches big Bluefish, Sea Mullet, Puppy Drum and Blow Toads.

On the north side of the Bridge the Trout were biting. Steve Howard, Gene Perry and Al Minton caught some beauties off the beach. Scattered Sea Mullet and Blow Toads were on all our beaches with Ryan Ross catching a 19.5” Puppy in S. Nags Head.

Piers are catching some Blow toads and Sea Mullet.

Offshore had good Yellowfin catches. Near shore caught plenty Bluefish and inshore fishing was good a well with anglers hooking up with specks, Blues, sound Stripers and Puppy Drum.

On Thursday, the winds were NE at 4 and the water is 49 degrees. Small swells, little wind and sunny.

Vacationers are taking advantage of the summer-like weather and enjoying some time on the water. On Wednesday, inshore anglers had a great day catching limits of Puppy Drum. One inshore boat ventured near shore and experienced a great catch of Bluefish and Red Drum, along with lots of Shark action thrown in!

Two offshore boats returned early on Thursday with boxes full of Blackfin Tuna. Several others stayed out the full day and returned with excellent catches of Blackfin Tuna, a few Dolphin, and a Wahoo. Bottom fish included Black Sea Bass and Amberjack. Looks like fishing is getting better all along the Outer Banks.

I am Jim Brewer, Editor of the new CvilleBuzz, a humble on-line attempt to entertain those, not only … END_OF_DOCUMENT_TOKEN_TO_BE_REPLACED