You are here: Home / Road Trips / The Rocky Mountaineer 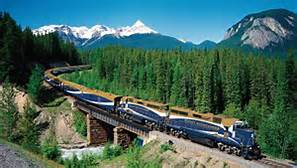 Looking for a vacation in addition to the beach? Do you enjoy the great outdoors and spectacular scenery? Want to see lots of wildlife? Do you appreciate great food and service?

Then I have a trip you need to put on your “bucket list”.

For years, my two brothers and I have talked about a train ride across Canada. Recently, we decided that “We ain’t getting no younger” (as dad used to say), so we visited AAA in Charlottesville, and in a matter of a few weeks, we straddled that big bird flying into Vancouver, British Columbia.

Early the next morning we boarded the Rocky Mountaineer. There were about 450 passengers aboard, mostly Europeans and Australians. There were only 6 or 8 Americans in our car, the first car. A few cars had an upper deck, but that was more expensive.

The first day, we followed the Fraser River through the Cascades. It was warm and we did not see much wildlife, but we saw lots of waterfowl – ospreys, bald eagles, Canada Geese, wild ducks. We only saw three deer (muley’s). We went thru Hell’s Canyon and saw lots of snow-capped peaks.

The hospitality and food were great. Between the Cascades and the Rockies, there was some flat land.

As we neared Kamloops, BC, we saw many bighorn sheep and some nice rams. After 10 or 12 hours and roughly 300 miles, we stopped in Kamloops and spent the night. Buses picked up passengers and transported us to various hotels.

Before we got off the train, they gave us a key and our checked-in luggage was already in the room. How’s that for service?

The second day, we traveled to Banff, Alberta, roughly 300 miles. We went through the Rockies and crossed high bridges, as well as through a 5-mile tunnel. We saw mountain lakes, waterfalls, switchbacks and snow-capped peaks. As we rolled into Banff, we saw lots more wildlife – bighorn sheep, black bears, deer, elk (several nice bulls still in velvet) standing along the tracks, styling.

The next three days we took buses on day-trips around Banff, Lake Louise and Jasper. We took the gondola in Banff and saw mountain goats at the top. We visited an ice field and saw a glacier.

From Jasper, we took the VIA RR to Toronto for three days and three nights. We saw moose in Manitoba and a large gray wolf in western Ontario. He was standing in a clearing in the forest, profiling.

I am Jim Brewer, Editor of the new CvilleBuzz, a humble on-line attempt to entertain those, not only … END_OF_DOCUMENT_TOKEN_TO_BE_REPLACED