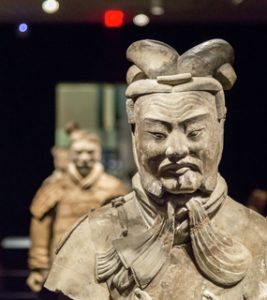 Sherman Shifflett from Louisa recently toured the Virginia Museum of Fine Arts in Richmond and saw the terracotta warriors on exhibit.

“Along with the warriors we saw a horse, jewelry (some gold), pottery and weapons,” he said.

First discovered in 1974 by farmers in China, an underground army of nearly 8,000 life-size terracotta figures is known as one of the greatest archaeological finds of the 20th century. Discovered one mile east of the known burial site of the First Emperor of China (r. 221–210 BC), or Qin Shihuang, the terracotta army was created to accompany the emperor to the afterlife. This exhibition features ten majestic terracotta figures, including a cavalry horse, among 130 works that tell the story of China’s birth and one man’s lasting imprint on a nation.

The exhibition also features arms and armor, horse and chariot fittings, ritual bronze vessels, works in gold and silver, jade ornaments, precious jewelry, and ceramics. Excavated from the First Emperor’s mausoleum complex, as well as aristocratic and nomadic tombs, the objects date from the Eastern Zhou dynasty (770–256 BC) through the Qin dynasty (221–206 BC) and represent the complex history, myths, and burial customs of ancient China. They also explore the First Emperor’s profound influence on Chinese history.

The exhibit will be on display through March 11. Sherman suggests a mid-week visit because it is quite crowded on weekends.

For more information, go to www.VMFA.museum

Road Trips: How To…

Road Trips – When To!

The Beach on a Budget

I am Jim Brewer, Editor of the new CvilleBuzz, a humble on-line attempt to entertain those, not only … END_OF_DOCUMENT_TOKEN_TO_BE_REPLACED