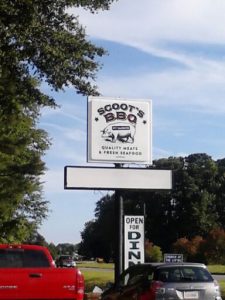 All the votes have been counted and it’s official. Scoot’s BBQ in Gloucester Point has been named the best BBQ Restaurant in Virginia in a contest sponsored by Virginia Living Magazine.

Andy Reams, a fellow BBQ Aficionado, said that Scoot’s must be pretty darned good to edge out King’s BBQ in Petersburg, Andy’s choice as “the best.”

I have to confess that as much as I like BBQ, I haven’t eaten at either Scoot’s nor King’s, not the other two of the top-four finalists– McCoy’s BBQ in Fredericksburg and Triple Crown BBQ in Luray.

Scoot’s is located on Route 17 just north of the Coleman Bridge in Gloucester Point. The restaurant serves both plates or sandwiches of pulled pork, chicken, beef brisket and St. Louis-style ribs. They also offer smoked wings and smoked turkey. The menu includes a large selection of seafood such as Crab Cakes, Oysters, Shrimp and Combo Platters.

“Again I ordered the BBQ Combo. Along with the slaw and corn muffin which is included I added fried okra and baked beans. I did try to substitute the chicken for sausage but they don’t allow you to do that. Nonetheless, the pulled chicken was really good. It came with a little sauce on it but this time I added their sweet & spicy sauce. Man that was a good combination. The pulled pork and the sliced brisket were awesome. Plenty of smoke flavor. I didn’t add anything to either of them. The brisket had a little sauce on it but not covered in it.”

Another review offered this:

“I went with a beef brisket sandwich with cole slaw that offered plenty for a hearty lunch. Some restaurants fill their sandwich with slices of brisket that isn’t always tender. At Scoot’s, the meat is partially chopped and some of the most tender I’ve had. A rich tomatoey sauce adds lots of flavor and a little kick.

Scoot’s apparently takes care to slow-smoke its product. Barbecue was a great choice here, so I’m anxious to return and try other items.”

If you enjoy BBQ, check out Scoots on Rt. 17 in Gloucester. Call them at 804-993-7063 or email at info@scootsbbq.com.  Their web site is still under construction.

I am Jim Brewer, Editor of the new CvilleBuzz, a humble on-line attempt to entertain those, not only … END_OF_DOCUMENT_TOKEN_TO_BE_REPLACED