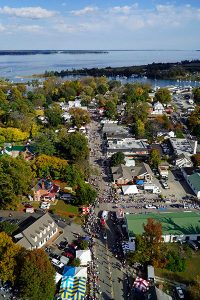 About 15 years ago, I went to my first Virginia Oyster Festival in Urbanna. I have been going since.

The Oyster Festival is one of the best two-day parties in Virginia and the 56th festival is now in the books. Always held on the first full weekend in November the festival was created as a fundraiser for the local fire department, and it still is. Plus, it has put the sleepy little village of Urbanna on the map.

Estimate are that over 70,000 people squeeze their way onto four or five streets in Urbanna – about the size of Madison, VA – for two fun-filled days of eating, drinking, shopping and entertainment.

The festival last week was one of the nest ever. Huge crowds assembled on both Friday and Saturday and the weather was ideal. The interesting thing about the Oyster Festival is that it is always one of the friendliest crowds ever. You’d think that with that many people crammed into such a small space, there would be an altercation or two, but it doesn’t happen. You will see familiar faces from home and strike up conversations with total strangers.

I lit up a cigar on one of the outdoor vendor fields and immediately met two other cigar aficionados – one whose wife has made him quit because he talked her into giving up cigarettes. The other guy recommended a nice Madera wrapped stogie at about $9 per stick. There are also children and lots of dogs at the festival. It’s just a fun time.

The festival is free, but the $10 parking fee on the edge of town helps the city raise extra revenue for the fire department. There are shuttles every 10 minutes or so between the parking area and downtown. There is also some of the best outdoor food in the world served at the festival and lots of vendors and places to shop.

During the two-day affair, there is an oyster shucking contest, an antique auto show, beer and wine gardens, a Fireman’s Parade, and the Oyster Festival Parade complete with bands, Shriner’s miniature car stunts, and a general salute to the military.

If you’ve never been, this is one road trip you’ve got to take. Next year the event is set for November 2 and 3rd.

On the Road to Sunset Beach

I am Jim Brewer, Editor of the new CvilleBuzz, a humble on-line attempt to entertain those, not only … END_OF_DOCUMENT_TOKEN_TO_BE_REPLACED