You are here: Home / Road Trips / Kick Back at Topsail 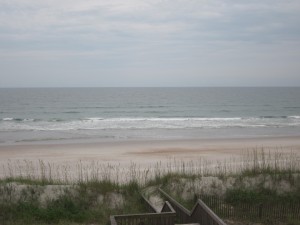 Beaches, beaches, everywhere. There is Virginia Beach with wall-to-wall hotels and Myrtle Beach with wall-to-wall traffic, and more golf courses than seagulls. There is Corolla, Duck, Nags Head, Hatteras and many others. But one of my family’s favorite get away spots is Topsail Beach, on the southern coast of North Carolina. My old friend Bill Herndon of Charlottesville was the first to mention Topsail. He and his wife Carolyn made it their beach home for at least a week every summer. Bill said he liked the place because there was really nothing to do, except kick back, enjoy the white sand and relax.

If there ever was such a thing as a family beach, Topsail is it. Topsail Beach is on a sliver of sand just north of Wilmington and south of beaches like Emerald Isle and Carolina Beach on North Carolina’s Grand Strand. There may be a couple dozen commercial establishments on the island, including a two great seafood markets where the fish were big enough to eat. The rest is family cottages. Topsail is like a trip back in time. The beaches are un-crowded and pristine and the surf calm and soothing.

The best fishing at Topsail (and most of the southern Carolina beaches for that matter) is for bluefish and mackerel. In fact, this part of the Atlantic is King Mackerel territory. There are weekly King Mackerel tournaments with tens of thousands of dollars in purses and prizes.

A fisherman with a boat is in his element. Back in the sound behind the islands, are lots of flounder, bluefish, speckled trout and puppy drum, but without a boat, it’s tough. From the shore, it’s rat-a-tat-tat and no more bait.

Topsail, by the way, is pronounced “top-sul”. It got its name, or say the legends, because pirate ships hid back in the lagoons behind the islands, waiting for a merchant ship to attack.

“Be on the lookout for the top sails,” said the captains. Thus the name.

If you happen to be a fan of shrimp, Topsail is your kind of place. The same surf that attracts small fish, also appeals to Carolina shrimp and their numbers are legion,

They often sell shrimp at $1.50 a pound at the docks, assuming you buy at least 10 pounds. Many tourists load up their coolers on the way back home, then dine on the succulent shrimp throughout the year.

Also of interest at Topsail are the lookout towers along the beaches that were once used to track the flight of missiles in World War II.

The beach is also a Mecca for shell collectors. Shark’s teeth are plentiful.

If all goes well on I-95 south, it takes just a little under 6 hours from Charlottesville. It’s a pleasant journey, almost all Interstate. There are lots of cottages at Topsail and many are available, even the week before the 4th of July.

You can go to www.topsailcoc.com for Realtors and more information.

The Varsity: What’ll Ya Have?

Need A Frog? Go To Springdale

I am Jim Brewer, Editor of the new CvilleBuzz, a humble on-line attempt to entertain those, not only … END_OF_DOCUMENT_TOKEN_TO_BE_REPLACED