You are here: Home / Road Trips / A Day at the Fair 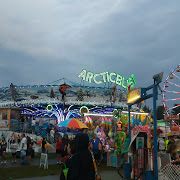 Nancy wanted to go to the State Fair and I had run out of excuses. The last time we went, it was at the old fairgrounds. We had to wait an hour in bumper-to-bumper traffic to negotiate the last mile. By the time we parked, I was ready to go home. Now, the State Fair is held at its new location at Doswell, but I feared the worst.

As it turns out, I was pleasantly surprised. Whoever is in charge of running the Fair should be our next governor.  Everything went as smooth as an IHOP pancake.

Traffic was simply no problem. The direction and signs were easy to follow. State Police guided us quickly into the fairgrounds and the parking crew was on top of its game. It took us less than five minutes from the time we entered fair traffic until we were parked. Then, a shuttle took us quickly to the admission gate.

This is the State Fair’s 10th year at Meadow Farmand the new Doswell location is first rate. There are basically three sections – the lower livestock area, the middle midway section with rides and vendors, and the upper section with children’s rides, agriculture displays and an Old McDonald’s Farm.

We went along every path and covered every inch of the Virginia Fair Grounds. I hadn’t walked that far in – well – never. But we had a great time.

The overall cleanliness of the Fair was impressive. There were thousands of visitors and hardly a speck of trash on the grounds. There were Fair personnel on hand to help with directions and friendly instructions. The restrooms – not Porta Potties – were convenient and clean. The food was excellent. The best thing I ate was a Footlong Corn Dog with delicious, crispy breading. The Brats were also good and I had a genuine, old fashioned root beer. That had been a while. There was a huge selection of all kinds of food including Fried Oreos, but we passed on those.

There was an indoor arena with crafts and unique gifts. We bought a neat siphon for our fish tank and a pool float that does not require a pump. You just shake it and air rushes in. There were  pots and pans displays as well as knife and kitchen gadget demonstrations. There was beautiful artwork and a man creating masterpieces with a chainsaw and a large log. Lots and lots on interesting stuff.

We enjoyed touring the livestock yards where one Mama Holstein had just given birth to a calf the size of a Harley. I bet that hurt.

I even won a teddy bear. I took on a half dozen sharp-shooting 10-year-olds at the water gun shooting stand and I blew ‘em away. It just so happened that the middle of my three tri-focal lenses was zeroed right in on the target. The young ‘uns didn’t have a chance. But I gave my bear to the little girl beside me since she didn’t have any. I wasn’t a “fair” fight.

The State Fair runs through this weekend. Tickets are $12 for seniors and $15 for adults. I think it’s $12 for a youth ticket and 4 and under are free. If you go Sunday, you’re in luck.

If you have time, go to the Fair. It’s a fun way to blow seventy-five bucks.

A Visit to Lake Moomaw

I am Jim Brewer, Editor of the new CvilleBuzz, a humble on-line attempt to entertain those, not only … END_OF_DOCUMENT_TOKEN_TO_BE_REPLACED