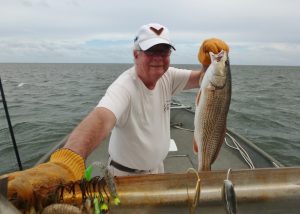 The specks are sleek assassins with a set of dentures designed to destroy their prey. They are the jaguars of the flats, striking without warning. They are silver and black beauties with touches of purple.

The puppy drum, the redfish, are Brahman bulls with scales. The have the power of John Deere Tractor and the stamina of a long distance runner. The don’t just eat a bait, they annihilate their targets. When hooked, they give no quarter. They fight to the finish.

A lucky angler will have a successful day catching even one of these species. A blessed angler will catch both. For Capt. Reese Stecher and his clients, the fishing for specks and drum has been world class with multiple trips with limits of both species.

Yesterday, I was fortunate to get a taste of this shallow water banquet. I fished with Capt. Stecher, my long time friend, for about 2 hours and it was as good as it gets.

The overcast, windy afternoon started with a bang, then a “ping”, as a big drum busted Reese’s line with a savage strike at the boat. I then missed three out of four bites before setting the hook on a pup, the only one that was undersized that afternoon.

Reese had lined us up in slough over grass beds that had been consistently productive, and we were soon into the fish. Using a swimming mullet bait under a popping cork, we splashed the rigs across the flats until a trout or a drum took notice and we hammered them. We finished with a half dozen beautiful trout and as many puppy drum. And we lost a number of fish, including what looked to be a 5-pound speck. Had we stayed a little longer, we would have easily put our limits of speckled trout on ice.

I had been in touch with Reese for several weeks once Nancy and I decided on a fall getaway to Nags Head. My mouth began watering when I got this email:

Reese says that in his 20 years as a charter captain, this has been one of the best stretches ever. And it might get even better. Typically trout and pups bite well into fall and even in cold weather.

Fellow anglers, if you want to get in on some world class fishing with light tackle, now is the time.

Capt. Stecher of Beach Bum Fishing charters knows his stuff. Yesterday, while other boats stayed in port with winds of 15/20, we hammered the fish. We were the only boat in the sound. Reese knows the waters of the Nags Head sounds and the Oregon Inlet so well that he can fish in calmer water and salvage a trip, even in inclement weather.

Blues on the Rappahannock

I am Jim Brewer, Editor of the new CvilleBuzz, a humble on-line attempt to entertain those, not only … END_OF_DOCUMENT_TOKEN_TO_BE_REPLACED