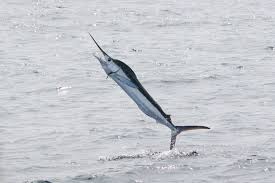 Offshore Charters out of Oregon Inlet sailed Wednesday and the white marlin were waiting. Boats caught and released numerous fish and put a few yellowfin tuna on ice, as well. The “Country Girl” had six marlin releases. Nearshore charters returned with catches of Spanish Mackerel and bluefish. The Inlet crew reported catches of trout, puppy drum, and bluefish!

Rain hindered surf fishermen during the latter part of the week, but Hatteras Island had scattered Spanish, some bluefish, sea mullet, and small pompano. Frisco had an awesome run of Spanish and bluefish on Shore-Lures and Sting Silvers.
At Nags Head, anglers on Little Bridge on the Nags Head/Manteo causeway caught small puppy drum.

Cobia are still biting, but are on the move, heading south. The red drum are still patrolling the lower bay waters. Spanish Mac fishing continues strong and the King Mackerel bite is really heating up. Big flounder are showing around the CBBT. Spot fishing is on fire – nice fish, too,

Rivers are clearing, but more rain is on the way. Bass and crappie are moving shallow in all the big lakes. At Lake Orange, Darrell Kennedy of Angler’s Landing (540.672.3997) says that water temperatures are in the low eighties. The water is clear with fish definitely on the move heading to the shallows. Bass and crappie are feeding up on baitfish. Catfishing has been good throughout the lake using minnows and chicken liver. Walleye fishing has been improving with fish being caught on the points and grass edges.

James River Should be Good To Go

I am Jim Brewer, Editor of the new CvilleBuzz, a humble on-line attempt to entertain those, not only … END_OF_DOCUMENT_TOKEN_TO_BE_REPLACED