You are here: Home / Outdoor Report / What’s a Ribbonfish? 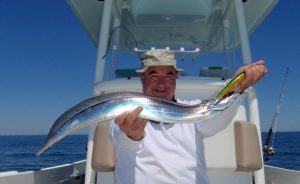 The ribbonfish are back. Boats trolling for Spanish mackerel off Virginia’s coast are catching them with regularity. But what’s a ribbonfish?
Also known as cutlassfish, ribbonfish look exactly as described – long, sleek and an iridescent blue with a mouth full of teeth. The “ribbons’ mostly hang on the ocean’s bottom, until they get hungry and swarm to the surface to intercept menhaden or whatever they can find. They will pound a lure or spoon fished just beneath the surface.

Traditionally, ribbonfish have been considered a prime bait for king mackerel fishing, but little else. They were considered more or less a trash fish and everybody tossed them back, until somebody ate one. They are delicious, a highly prized food fish in Japan. The meat is described as white and mild, and a little flaky: A cross between a speckled trout and a flounder. Nobody tosses them back anymore. They go in coolers.
Cobia are plentiful throughout the bay and it’s shaping up to be one of the best cobia seasons in memory.  Hot spots include Latimer Shoals, Bluefish Rock and Windmill Bar. And buoys are always possibilities. Most fisherman are chumming, but many fish are caught by sight casting.

Anglers continue to have good success with Spanish mackerel throughout the bay and along the oceanfront. Clark spoons and Drone spoons are productive when fished behind an in-line weight or planer board. Surface birds are another good method of presenting baits for the mackerel and bluefish.

Big red drum are still available throughout the lower Bay. Latimer Shoal and the shallow water near the northern section of the CBBT are where most of the fish are caught, but schools can pop up anywhere around the CBBT area. A popular angling technique for drum fishing is anchoring and chumming over the shoals.

Catches of spadefish continue around the Chesapeake Light Tower and have increased at the Bridge Tunnel. The best times to catch spadefish are during slack tide or in calm seas when the fish can often be seen fining on the surface. The bait of choice is clam though squid will work when the fish are aggressive. Flounder catches have increased around structure in the lower bay and there’s been reports of hit and miss croaker catches in the rivers.

Virginia Beach’s offshore blue water action is getting better by the day; it should peak in July and August. The yellowfin tuna bite has been great lately with some wahoo and dolphin in the mix. A nice blue marlin was caught over the weekend. Blue marlin encounters will increase in July and peak just in time for the Virginia Beach Billfish Tournament August 19-22. White marlin action usually continues into September.

Captain Jake Beck, Knot Wish’n guide service says the Spanish mackerel and bluefish bite was inconsistent last week. Reports are that its picking up. Captain Todd just sent a text message and said he had 4 on right then. Red drum and cobia are around. A few king mackerel were spotted breaching the surface.

Captain David Wright, High Hopes Charters is reporting a nice mix of blueline tilefish and yellowfin tuna on his offshore trips. He’s been doing some drops for swordfish. He had a broadbill swordfish attack one of his baits last trip, but it slipped the hook. Inshore his family fishing trips are in full swing. They are catching mostly Spanish and ribbonfish.

In the surf, Hatteras Island reporting scattered pompano, sea mullet and puppy drum. The northern beaches have the same mix, plus spot.

The Little Bridge on the Nags Head/Manteo causeway reported catching lots of small trout and a few keepers. Black drum and croakers were also caught from the bridge.

On the piers, it was ribbonfish, blues, Spanish, trout, pompano, stripers (one 24-incher), sea mullet and puppy drum.
Nearshore boats are reeling in plenty Spanish and bluefish along with some amberjack, albacore and ribbonfish. Inshore anglers are finding plenty of big trout and drum. Sheepshead are being caught around the bridges.
The offshore fleet caught a slew of yellowfin again but the sharks are a problem. There were some big-eye tuna  caught up to 145 lbs. Quite a few dolphin found their way into fish boxes. Blue and white marlin were released as well as sailfish.

At Lake Orange, Darrell Kennedy of Angler’s Landing (540.672.3997) says water temperatures are in the mid to low eighties with fish definitely in their summer patterns.  There is a lot of schooling activity with bass feeding on live minnows, soft plastics and top water lures in lowlight periods. Catfishing has picked up a lot with midlake being best, nightcrawlers and live minnows are the baits of  choice. Some walleye have been caught in the upper end in the grass beds on live bait fished over the top of the grass.

Elsewhere, bass fishing was very good at Lake Anna with a bag of five bass weighing 24.26 lbs. taking first in a local tournament.  Deep crankbaits and Texas-rigged worms are the baits of choice. Good numbers of keeper stripers continue to be caught by the Anna guides and their parties. Live bait presented at the proper depths is key.
Buggs Island gave up some good limits of bass over the weekend with 17 lbs. the winning weight for an open tournament out of Nutbush Creek. Crankbaits and Texas rigs are working well here also. The lake elevation is currently at 306 feet.
The James and Chickahominy Rivers are fishing well.  A top weight of  22 lbs. took a tournament on  the Chickahominy River. Topwater lures were the best producers on the Chick.
The upper James is at 5.1 feet, which is a normal level for late June/early July. The better fishing usually takes place early morning and late afternoon, but overcast days can be outstanding all day.

The Shenandoah is at normal flow and good catches of both largemouth and smallmouth are being reported.

I am Jim Brewer, Editor of the new CvilleBuzz, a humble on-line attempt to entertain those, not only … END_OF_DOCUMENT_TOKEN_TO_BE_REPLACED