You are here: Home / Outdoor Report / What’s a Flier? 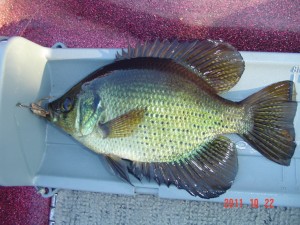 I was scanning through a recent Chickahominy Lake report by Capt. Art Conway and saw that his party had caught two fliers. I wasn’t exactly sure what a flier was, so I looked it up. As it turns out, I have caught a few of these interesting sunfish in the past, but I wasn’t sure at the time what they were. Here’s the scoop.

In the south, a flier may also be known as a goggle-eye, fly perch, sand bream, brush bream, round sunfish, flier bream or mill-pond perch. They are about the size of a bluegill – the biggest one recorded weighed in at 19-ounces. Fliers live for about 5 years.

Fliers are very good to eat, so if you catch one and are in the fish-scaling mode, put it on your stringer.

Capt. Art Conway of Conway’s River Rat Guide Service (804-746-2475) out of Ed Allen’s Boats and Bait reported that Chickahominy Lake mid-day water temperatures were in the mid 60’s in the lower main lake and in the major creeks on Wednesday The lake level was about 8 to 10 inches above the top of the dam.

Water is getting back into the upper 60s. Weather looks good with upper 60s to start the week with mid 70s Wednesday into the weekend. Thursday and Friday include a chance of scattered thunderstorms. Lows in the mid 50s.

Fish are coming off spawn and will take to top waters. With calm water, clear water, and cloudy skies, take advantage of wood cover or low tides to walk the dog with a Lucky Craft Gunfish or make short twitches with Lucky Craft Kelly J prop baits. Tie to 20-pound test Gamma Torque braid. Keep a weightless stickworm tied on for a second chance at fish that blow up and miss.

With a bit of chop, double willow spinnerbaits tied to 14-pound Gamma Edge fluorocarbon line are effective in, over and through grass. The clearer the water, go with faster retrieves and use chartreuse or fire tiger skirts. In slightly stained water, use white skirts.

Also using orange or bubblegum floating worms with a 3/0 Mega Bite hook and 12-pound Edge cast to fry guarding bass will get bites. Short twitches and pauses will work. Also try drop shots and shaky head, as fish will still be spawning. These are also effective for per spawn and post spawn fish.

Contributed by Darrell Kennedy of Angler’s Landing (540.672.3997). The water is clear with temperatures in the mid 60’s. Largemouth bass are in a post spawn pattern, feeding heavily on top water baits in low light periods. Soft plastics are a better option during the day for the bass bite. Crappie are also in post spawn, feeding on small minnows. Bluegill are moving up to spawn in the shallows and are hitting red wigglers. Walleye are taking live bait on hard, bottom areas down lake. Catfish are feeding in mid-lake on chicken livers and live bait.

The water temperature has been a steady 68 degrees throughout the lake. The water is muddy after all the rain this week, but after a little more sunshine and the lake will be only slightly stained. Most of the bass have spawned. The bucks are babysitting their fry on the shoreline. They’re working hard keeping predators away from their babies. If they bite your hook, it is only because you’ve made them mad, not because they are hungry.  Be mindful, when you put a buck in your live well, the bass fry become bait fish.

The crappie are scattered and are the most respectful of the bass spawn. As soon as the bucks leave the shoreline, the crappie will be extra active again.

The middle and upper James River has been a muddy mess due to all the rain. Hopefully next week will be better.

Holly Grove Marina says that the largemouth are mostly done spawning, but some are still on their beds. They are taking top waters and spinners. Crappie are hanging at about 5 to 8 ft.. They will take minnows and jigs. The catfish bite is good. Bream are starting to gather around the docks and bite small worms.

Captain Travis Patsell of Cats N ‘ Stripers Fishing reports that the water is warming and pollen is laying a dusting all around. The water temperature is in the 60s and climbing.

Stripers: The majority have made their move to the lower reaches for the spawn. Fish aren’t spawning in Cedar Keys as they did in the 80s to 90s. Although they can be spotted in the lower reaches, such as at the Dam, Craddock and Witcher. Fishing in these areas seems to be hit or miss. The fish are there, just not active some days. Staying mobile will help. I also noticed the dam pump back Sunday was muddy. So that as well can affect the fish. Fishing alewives on all methods has been top producer of our catches. I still will use a couple big shad and that’s catching our bigger fish. Some fish are still up the lakes, river arms and creeks. But expect a slow bite between although when you do encounter them. There generally on the plus size.

Artificial: Some busting action has been happening in the morning and evenings, though it has not been consistent. The night bite has been better. With alewives spawning, plugs such as Thundersticks and Redfins have been the top producers. Fish shallow and slow along rip rap and points.

Catfish: With a few days of slow striper bites we’ve targeted catfish several times during the past 2 weeks. And doing well! Live and cut bait being top producers when fished on Carolina rigs. In 15ft and less of water. I am targeting the mid to upper parts of the lake, and doing excellently on both species with some nice flatheads and channels. Releasing all fish is crucial right now, cats over 10 lbs. have yet to spawn. Give them a chance folks.

Crappie:  They can be found in creek arms, brush and docks. Try around 12 ft. down. Minnows, jigs and small alewives should produce.

Tangent Outfitters says the bass bite is great. They are “hammering” the smallies. Good lures have shifted from cranks and spinners to soft plastics. Muskie are starting to get active, and will take an inline spinner. The water is in the mid 60s, high green and at an almost normal level.

Harry Murray reports that both north and south forks of the Shenandoah are high and discolored at this time, but should clear up by this weekend.

The stocked and delayed harvest streams in the Valley are full but fishable.

The shad bite is just about over. You can find a few in the river but it is nowhere near what it was.  However, everything else is picking up with good catches of largemouth bass on spinnerbaits cast along boat docks and Senkos on the grass flats.  There are also some very pretty yellow perch being caught as a by-catch. The snakeheads have started biting in earnest.  Most are caught around boat docks on crankbaits. Many are better than 7 pounds.

Preston Cox and Larry Wollersheim took 1st place & Big Fish with last Sunday’s catch of 20.41-lbs. and 6.52lbs. Several 2 pound crappie have been brought to the Anna Point Marina scales. Stripers to 15 pounds are being caught.

I am Jim Brewer, Editor of the new CvilleBuzz, a humble on-line attempt to entertain those, not only … END_OF_DOCUMENT_TOKEN_TO_BE_REPLACED