You are here: Home / Outdoor Report / What a Walleye! 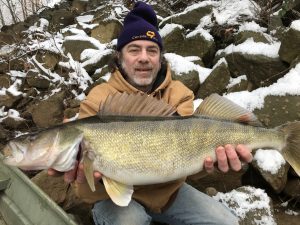 Tim Walts of Crozet caught and released this 29-inch walleye on the Rivanna River on Valentine’s Day. It was a sweetheart of a fish, that’s for sure. The Rivanna is an excellent but underutilized walleye fishery.

Darrell Kennedy at Lake Orange says the walleye are putting on the feed bag there, as well.

The smallmouth bass are starting to feed on the North and South Fork of the Shenandoah River and can be found immediately below the ledges which cross the river. These lie perpendicular to the river currents forming shallow dams. The water below these ledges often ranges from 2-5 feet deep over cobblestone stream bottoms. Large numbers of sculpin minnows and crayfish live in these areas.

Bass and crappie fishing is 3excellent now on most all Virginia lakes and tidal rivers. We just need a bit warmer weather.

Trout Streams are in perfect condition and April is the best month of the year for mayfly hatches. Time to go fishing.

The Pups Are On the Feed

In Virginia saltwater, the puppy drum are hungry. There have been nice catches made inside all the local inlets at Virginia Beach and from the  rivers as well. Most are being caught in shallower water, back in creeks. Some grey trout, speckled trout and small stripers have also been caught in the same areas.

As the Bay water temperatures rise, so do tautog catches. The temperature is up to 54.7 degrees at Thimbles Shoals. Ocean wrecks usually produce first, but now the bite has moved into the bay.

The water is still too cold for any significant surf fishing action. It’s about 50 degrees in the ocean and 57 in the backwaters. Skates are biting and the hardy souls at Hatteras are having fun catching sharks to a hundred pounds and more.

Boats running out of Oregon Inlet NC are catching limits of yellowfin and blackfin tuna on most every trip.

I am Jim Brewer, Editor of the new CvilleBuzz, a humble on-line attempt to entertain those, not only … END_OF_DOCUMENT_TOKEN_TO_BE_REPLACED