You are here: Home / Outdoor Report / Wahoo at Hatteras 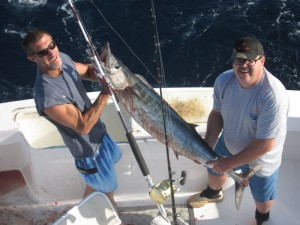 Capt. Dave Wilson aboard the Godspeed Charters said they had beautiful weather and great fishing on Wednesday.

“When your first fish of the day is a citation, 41 pound wahoo, you gotta believe it’s gonna be a great day,” he remarked. “We wound up catching three wahoos before moving offshore to look for yellow fins. The gaffer dolphin found us first, so we whacked a bunch of them. Towards the end of the day we caught two out of four yellowfin bites and a couple black fins. Nothing like variety!

On 4-18, the weather was perfect. “We had a pretty steady gaffer dolphin bite, and landed one out of a couple yellow fins. We also did a quick “stop and drop” for a snowy grouper. We had one mystery bite on a big bait, but we’ll never know what it was! The boats to the east had great blackfin fishing to go along with gaffers and a couple of wahoos.”

The tautog bite is exceptional at the CBBT and on other structures in the bay. The action on the near shore wrecks is also very good and good number of cod are also being caught. Wrecks further offshore, like those at the Triangle Reef, are also producing catches of cod. The tautog bite is slower out there than inside the bay but that is where the largest tog are being caught. The tog season closes at the end of April.

The Spring Trophy Striped Bass Season opens May 1. Maryland’s springtime trophy season is a very popular and productive fishery. Virginia’s version is not much of a fishery with few anglers participating and even fewer “trophy” striped bass caught. There will be more interest when the spring bay season begins on May 16 when smaller, resident fish may be kept. If you are going to participate in the spring trophy fishery there are a couple of changes this year. The minimum size has been increased to 36 inches. In addition to the normal reporting requirements of any trophy fish kept, this year you will also need to have a Spring Striped Bass Trophy Permit. This is a free permit and may be obtained online at: www.webapps.mrc.virginia.gov/public/permits

We are still waiting to hear what the federal government is going to do with our offshore bottom fishing. It is expected that we will see emergency regulations in place soon that are close to Virginia’s current landing regulations for the offshore bottom fish. Blueline tilefish has been shut down to our south but for right now, we are still allowed 7 tilefish and 1 grouper per angler combined species. Both blueline and golden tilefish are being caught around the Norfolk Canyon. Tuna are becoming more accessible to Virginia’s offshore fleet as warmer water has moved into the Cigar-Norfolk Canyon area but still the best action is closer to the Oregon Inlet boats.

Bluefish are in our coastal waters and some good catches have been made inside Rudee Inlet where some puppy drum are also being caught. Both bluefish and puppy drum activity will be increasing inside of the bay. Big red drum and medium-sized black drum are being caught in the surf of the Eastern Shore.

Flounder fishing is picking up with fish caught inside the seaside inlets, at the mouth of Back River, and on Hampton Bar this week. Croaker are being caught in the York and James Rivers and catches were made off of the fishing piers this week. A 32-inch red drum was caught (and released) from the Buckroe Pier.

The first croaker! That’s always a good sign and the first croaker landed on hook and line was reported last week by Chris Bait & Tackle. Croakers generally move up into the bay several weeks before they decide to bite. Well, now, they’ve bitten. Get out the saltwater  rods and reels.

Capt. Bob’s says although it’s a slow bite, there are some flounder being caught. Most anglers launched from Memorial Park to fish the Assateague Channel with just a few keepers reported.

Capt. Brian Esteppe, with Y Knot Charters, had a good day fishing the Four Mouths area.  He had flounder at 17″ and 16.25″ and a 16-incher the day before.

Good news from the Little Bridge at Manteo. There were stripers, shad and a good number of trout caught Wednesday. It was also a good day for the piers with sea mullet, spot, gray trout. Avalon had bluefish.

Five Charters went out on Wednesday and all came back with a good score of fish. One boat returned with 17 yellow fin and 11 dolphin. Another party landed 10 tuna and 9 dolphin while a third boat showed up with 13 yellowfin, 22 dolphin, 1 black fin and a wahoo. Fourth boat produced 15 dolphin 9 yellow fin and a release marlin.

On Saturday, 16 boats sailed. Most had great catches including yellow fin, and one blue fin tuna along with plenty of dolphin, a few wahoo and a couple of mako sharks in the mix.

Form Red Drum & Tackle: On Tuesday Ramp 44 had sea mullet, blow toads, puppy drum and yearlings. The Point had big sharks all day. There were about 20 Big Drum caught this evening at the Point.

Waiting for the Azaleas to Bloom

For 20 years, my red Azaleas have shown their blossoms when Potomac Largemouth are spawning. Fish are shallow and water is warming. Spawn is just a few days to a week or so away.

Water temperatures are getting into the mid to upper 60s. The week starts around 80 with thunderstorms, dropping to the upper 60s to around 60 by the end of the week. Overnight lows are around 45. Sun on Tuesday and Wednesday with clouds the rest of the week.

Carolina rigs in the same areas. Lizards in green pumpkin patterns on 3/0 hooks and a 3/4-ounce weight can be dragged over gravel flats. Move short distances and pause. Use 30-pound Torque braid as main line with 12-pound Edge Fluorocarbon leader.

Stay on them as the tide moves. If rising, move in. As it moves out, fish tend to scatter. Fish are remaining in spawning areas and not moving very far.

Contributed by Darrell Kennedy of Angler’s Landing at Lake Orange (540.672.3997). The water is clear with temperatures in the mid to upper 60’s. Largemouth bass are in all phases of the spawn with a lot of nice fish being caught in the shallow water on soft plastics and live bait. Black crappie are also in all phases of the spawn with some nice catches being caught on small minnows around shallow structure – such as the beaver huts, brush piles, etc. Bluegills and shell crackers are starting to move on the beds, as well. Some nice catfish have been caught in the deeper water with chicken liver and night crawlers. A few nice walleye have been caught as well with soft plastics and crank baits.

Capt. Art Conway of Conway’s River Rat Guide Service (804-746-2475) out of Ed Allen’s Boats and Bait reported that Chickahominy Lake mid-day water temperatures were in the mid 60’s in the main lake and the mid to high 60’s in the major creeks on Wednesday (4/22/2015). The lake level was about six inches above the top of the dam. The water was moderately brown and slightly cloudy in the lower lake.

Fish are biting at Anna. Nice ones, too. Lady angler, Suzie Hust, weighed in a fat 7.73 pound largemouth that went for a Tiger Shad spinnerbait. Hayden Baugher, age 8 landed a pair of stripers weighing 5 1/2 Pounds & 4 Pounds respectively. Another youngster, Tyler Forsch, scorde with a one-pound plus crappie.

Guide Doug Reynolds notes that the river has been up and muddy over the past few weeks. A few jet boats were lucky enough to get out towards the end of last month with mixed results. With water temperatures hovering in the sixty degree range the smallies should be set to spawn

Shawn Hash at Tangent Outfitters says that the river is more than 10 times its usual level. He thinks that it will be fishable by Thursday. Shawn can be reached at (540) 257-0415 or tangentoutfiters@gmail.com.

At Holly Grove Marina, Craig Karpinski says that the largemouth bass are on the beds. They are taking minnows and plastic worms, with Green Pumpkin being a good color choice for the latter. Crappie are also on their beds and will go for minnows and jigs. Cats are hitting well on minnows, clam snouts, chicken livers and shad. Bream have moved up and will attack flies and small worms. The water is stained, in the low 60s in the main lake and warmer in the creeks.

LT Burnette of SML bass masters reports that spring is here and it is that time of year that you can catch a bass on nearly anything in your tackle box. The big females are moving from their winter haunts into their pre spawn staging areas which are typically the secondary points leading into the spawning cuts.  There will also be a few fish following the shad into the creeks as well so don’t be afraid to get super shallow to get bites.

Local angler, Bill Uzzell, reports that Lake Moomaw is providing a lot of action for both smallmouth and largemouth bass. Smallmouth up to 6 lbs. are being caught throughout the lake on a variety of lures. Largemouth up to 8 lbs. are also being caught throughout the lake as well. Popular lures include jerkbaits, swimbaits, jigs, and crankbaits. A recent tournament 5-fish limit went 25.96 lbs. Recent heavy rain this past week has flooded the lake and slowed down the bite. Conditions should improve in 3 to 4 days. I see a lot of trolling for trout but have yet to confirm any results. No reports on crappie or yellow perch. Water temps are in the mid 50s. Remember that a parking permit is now required. Daily permits are available at the boat ramps. Annual permits ($50.00) can be purchased at the Highlands Chamber of Commerce in Covington or the Bolar Marina store on the Bath County side of the lake.

Smallmouth Bite Is On

I am Jim Brewer, Editor of the new CvilleBuzz, a humble on-line attempt to entertain those, not only … END_OF_DOCUMENT_TOKEN_TO_BE_REPLACED