You are here: Home / Outdoor Report / Outdoors: Trout are biting! 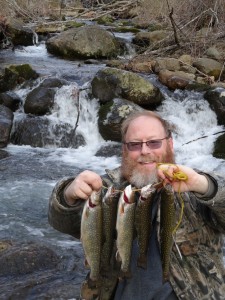 Virginia trout have been stocked in nearly every eligible body of water, and though fishing is slow, the trout are well dispersed and should begin to hit in earnest as water temperatures reach 40 degrees and higher. To find out which streams have been recently stocked, call the Game Department at (434) 525-3474.

Tommy Lawhorne at South River Fly Shop in Waynesboro said that high water over the weekend had slowed the action and dropped water temps to the low 40’s on the South, but before that anglers were catching trout up to 20-inches on midges, small nymphs and streamers. The put and take section of the South River was stocked on Monday. South River Fly Shop is located at 317 W. Main in Waynesboro. They have a fully stocked store and offer expert guide service on a number of streams. The store is also spearheading a drive to raise $4,000 to stock the special reg section of the South, which provides great recreational opportunities for hundreds of fishermen.

Freshwater action is just beginning following a brutally cold February and early March. Rivers are way high and water temperatures are chilly, but the days are getting longer and fish are starting to bite.

Anna Point Marina reports that iced-in ramps have kept most fishermen off the water at Lake Anna. Areas above the Splits were not reachable because of ice, but this weekend – with warm weather rolling in – should stir things up. Expect crappie to begin their move to shallow water any day now. Bass will also be vulnerable with the pre-spawn bite. More to come as conditions improve.

Bobby Whitlow at Bobcat’s in Clarksville says anglers venturing out are finding crappie and bass. Water temps at the backs of the creeks are pushing 50 degrees. Bass are hitting crankbaits and jerk baits in 10 feet or less. Crappie are spread out – from 3 to 15 feet. No report on stripers, thus far. Some nice blue cats are hitting cut bait uplake, on the humps and near the mouths of Bluestone and Buffalo creeks.

Riverside Camp in Lanexa reports that bass action is hot, despite the cold weather. On Sunday, March 8 two anglers weighed in largemouth at 7 and 8 pounds respectively, both caught on crankbaits. A few yellow perch are also beginning to stir. No report on crappie, yet. Riverside Camp is now open for business, renting boats, cabins and selling bait and tackle. Call them at 804-966-5536 for more information.

With winds keeping most boats near the beach, there is still not much to report off the coast. But once anglers can get out, tautog will be on the top of the list. If you plan to go, be sure to make arrangements for bait, since it is hard to come by. Toggers will find the best results on deeper structures, with fish available on wrecks at about 25-miles offshore.

A few folks are still braving the cold, sleet, and snow to try their luck in the Elizabeth River and lower Bay Inlets for speckled trout and puppy drum, with poor results. Severe fish kills and poaching may have taken their tolls on these fisheries, at least for the season. Most anglers will look for other options.

Interest in striped bass is non-existent, as are the fish right now. The schools remain well offshore, out of reach of legal boats. Anglers may have an opportunity to intercept the rockfish when they migrate back into the Bay in early spring to spawn.

Deep water bottom dwellers are still luring anglers out to water deeper than 300-feet when the weather allows. Boats venturing out are finding mostly big blueline tilefish when they can weed through the onslaught of dogfish. Some nice grouper, blackbelly rosefish, and golden tilefish are also available. Big seabass will also take your bait, but be sure to throw them back for now while the season remains closed.

Just when bluefin tuna anglers where throwing up their hands, lady luck finally provided a break. Boats working off the coast on North Carolina, near The Point, hooked into to some nice bluefins this past week, with most fish ranging in the 200 to 300-pound class. Boats filming the popular reality fishing show, “Wicked Tuna” on the National Geographic Channel, are also in the middle of the action, vying for their share. Hopefully this action will provide some good momentum as we transition into the spring season.

TW’s Bait & Tackle had this report for the week of March 9.

Surf Fishing Report:  The beaches from Corolla to Nags Head reported dogfish and skates. Water temp is still in the high 30’s but hey, there is still something to pull on! Down south towards Hatteras, there were some puppy drum reported. Ramp 49 had the best bite.

Sound Fishing Report:  The sound fishing the past few months have been very slow. With this warmer weather, the action should start to kick in. Won’t be long until we start seeing puppy drum and trout showing up.

Jennette’s: A few dogfish and skates

Inshore Boats Report:  No reports from inshore boats yesterday evening or this morning. If conditions continue to stay warm, this will not be the case much longer.

Offshore Boats Report:  It was another successful day offshore yesterday! A decent number of bluefins were caught between the boats out of Oregon Inlet as well as Hatteras Inlet. Some boats caught as many as 5 to a boat.

A private boat out of Pirates’s Cove, “Booby Trap”, came into the marina reporting a Bluefin weighing in at 518 pounds and 92″ long.

Capt. Dave Wilson on Godspeed Charters had this report: I felt like changing it up a little, and rolled the dice on the current being less to the south. I was wrong about the current, but we managed to get a nice catch of bottom fish in spite of the 3+ knots of tide. We caught our limit of six golden tiles and a snowy grouper before trying for some grey tiles. By then the current was close to 4 knots and virtually impossible to fish. We did catch a half dozen before putting out a few ballyhoo. We found a wayward dolphin on the troll before heading in.

I am Jim Brewer, Editor of the new CvilleBuzz, a humble on-line attempt to entertain those, not only … END_OF_DOCUMENT_TOKEN_TO_BE_REPLACED