You are here: Home / Outdoor Report / The Rudee Angler 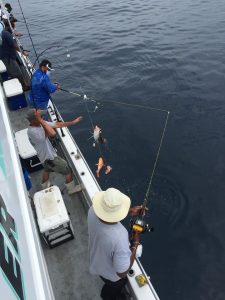 Not everyone has the time or the money for an all-day charter fishing trip in the Gulf Stream, but lots of folks would enjoy spending a half-day fishing out of Virginia Beach without paying a king’s ransom. For them, it’s the Rudee Angler, a head boat out of Rudee Inlet on the southern end of Virginia Beach.

Some head boats take trips and return with barely legal trout or small croakers, but the Rudee puts anglers on lots of nice, good-eating fish. This week, they were hooking into a number of tilefish, rosefish and some snowy grouper.

The Rudee Angler runs trips offshore, nearshore and inshore virtually year around. With proximity to the Atlantic Ocean and the Chesapeake Bay, the bite out of Rudee Inlet is always promising and can be action packed. Their  experienced captains have been fishing off of the coast of Virginia Beach for over 35 years. Everything you need for fishing is supplied and the mates are there to help you have a great day on the water. The boat supplies all bait and tackle, there is food and drink served on board, with an air conditioned cabin.

Elsewhere out of Virginia Beach, lots is happening.
The offshore blue-water action is red hot. The yellowfin tuna, big eye tuna and marlin are hungry. Some really large bigeye tuna are in the mix. Cecil Hatfield fishing onboard the Showtime landed a 242 pounder. On Sunday The Rebel boat caught one blue marlin and eleven white marlin.
Captain David Wright on the High Hopes says Spanish mackerel fishing is peaking and looks very good for the next few weeks. There are bluefish mixed in with the Spanish and Dr. Ken Neill reports loads of ribbonfish in the same areas. Captain Steve Wray on the Ocean Pearl out of Long Bay Pointe Marina has been loading up with Spanish mackerel on both morning and evening trips.
Captain Todd Beck from Knot Wish’n Guide Service out of Rudee Inlet says king mackerel have been seen jumping near the Spanish schools. Shouldn’t be long before someone lays a 40 plus pound king on the deck.
Coastal wrecks, the Chesapeake Light Tower and coastal buoys are holding some really nice spadefish and triggerfish. Look for spadefish, triggerfish and sheepshead along the CBBT as well. Big red drum and cobia also are available along the coast. Reds also are being taken around the mouth of the bay and along the shoals. A number of puppy drum have been landed near the Hampton Roads Bridge Tunnel. The black drum have moved into the Eastern Shore inlets and around the Chesapeake Bay Bridge-Tunnel islands.
Flounder numbers are on the upswing inside the inlets, around inshore wrecks, along the CBBT, near the Concrete Ships, around the Back River, the Hampton Bar and Eastern Shore flats. Speckled trout and puppy drum are in all three inlets and in the Elizabeth and York rivers.

Puppy drum or speckled trout? That’s a tough decision, but the sound behind Oregon Inlet is producing both. Capt. Reese Stecher (beachbumfishing.com) and parties caught lots of both species, including  puppy drum to 31 1/2 inches. There seems to be no slow down as the bite continues and could actually improve come fall. The Oregon Inlet Fishing Center reported false albacore,  red drum and specks on inshore trips and lots of Spanish and big red drum on nearshore excursions. Offshore boats are hammering the Mahi with limits on most boats. The blue-water fleet also caught yellowfin, blackfin, and limits of tilefish along with marlin and sailfish release citations.

At Nags Head, spot, sea mullet and small drum were landed by surf fishermen. The piers had small puppies, sea mullet, spot and some small trout.

Stan Cobb at Greentop says that Buggs Island has returned to normal levels – now at 301 feet, and the bass are biting all over the lake. Summer patterns are in effect and small crankbaits covering a lot of water are productive. Some boats have been drifting and catching lots of catfish. As crappie go deep in most lakes, anglers fishing at night under attractor lights are having great success.

At Anna, the night tournament anglers are consistently bringing in 16-pound bags. The James and Chickahominy Rivers are having similar success. Crankbaits are popular on these tidal waters as they cover water quickly and effectively. Of course, topwater lures are often all that are needed. Weedless grass frogs are at the top of the list.

Currently, many anglers are targeting blue cats on the tidal rivers. Fresh, live eels and fresh cut shad are the two most popular baits.

The upper James has dropped to 4.48′ at the Westham gauge. Once the levels drop below 5 feet, navigation can become tricky. Jet boats are used by river rats targeting smallmouth, as they can navigate in very shallow water, sometimes only inches deep. Others prefer canoes, kayaks, and small john boats to access ideal areas. These are also great for the smaller, horsepower restricted lakes that are very healthy fisheries. Some are electric motor only, but should not be overlooked. With ponds and lakes in full vegetation, grass frogs can be hard to beat as they can be cast into heavy cover to draw strikes.

I am Jim Brewer, Editor of the new CvilleBuzz, a humble on-line attempt to entertain those, not only … END_OF_DOCUMENT_TOKEN_TO_BE_REPLACED